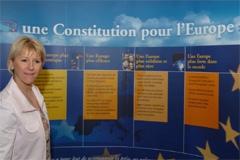 There is nothing europhile journalists like more than to be able to be slightly and somewhat deprecatingly amusing about the dreariness of the EU and its various denizens. Very worthy, of course, but, my dear, just a teensy-weensy bit dull.

And so, Nicholas Watt (who managed to misread the agreement about wine labelling between the EU and the USA but that is for tomorrow’s blog), started his piece in the Guardian yesterday with the following carefully honed words:

“On rainy afternoons in Brussels, when their mind-numbing work becomes a little too much to bear, European Union officials amuse themselves by tapping into the blog of Margot Wallström, the woman charged with bringing the EU closer to its citizens.”

He then mentions the sheer silliness of the fragrant Margot’s blog and the fact that other EU worthies are a little displeased about it. Actually, as readers of this blog know, there is nothing new about the story. Not only has it been covered in every eurosceptic blog in this country, it has been mentioned by the Daily Telegraph and even picked up by the American media. I suppose, the Guardian can’t help being a little out of date. But charming with it, I have to say.

After informing his readers of the fact that largely only “highly excitable” eurosceptics respond to Margot’s blog, Mr Watt looks at the reaction by the euro-worthies:

“But there is growing irritation in Brussels that Ms Wallström, Sweden's representative on the European Commission, has allowed herself to become an object of parody for neutral people and even pro-Europeans. Critics say this is undermining the deadly serious business of attempting to sell the EU after the rejection of the European constitution by French and Dutch voters.”

And the serious business? Well, Mr Blair has invited his fellow leaders “to an informal summit at Hampton Court palace at the end of next month to discuss the sustainability of the European social model” because only jobs and economic development will bring people round to loving the EU. How he will achieve that by discussing the sustainability of the European social model, remains to be seen.

Mr Barroso, as the “highly excitable” europhiles have been gasping out this week is about to make “a bonfire of regulations”. Again. Actually, he is about to drop a few directives that are at an early stage and consolidate various others, as well as the regulations (they are different things, Mr Watt), so they will look fewer but nothing much will change.

There will be no bonfires as these conflict with health and safety regulations.

“Even the European Parliament, which is often lampooned as a depository for failed or never-to-succeed politicians, is doing its bit. Josep Borrell, the president of the parliament, this week launched a new website which is designed to make it more accessible.”

It isn’t really. I have seen it and even try to find something on it. Not that different from the old one. This is not going to turn the people of Europe into zealous supporters of the project.

However, Mr Watt points out, the accusations of fluffiness directed at the fragrant one are unfair.

“Some of the most sophisticated thinking has come from a surprising quarter, however. When Ms Wallström can be prised away from her blog she has made some of the most acute observations - in speeches and at press conferences - on how the EU can do more to connect.

One of her most important messages, which is echoed by Britain's European Commissioner, Peter Mandelson, is that European leaders can no longer rely on the argument that the EU has preserved peace on the continent. "New generations of Europeans have no memory of world war two and they take peace for granted. Thank God," she said in a recent speech.”

Well, gosh a’mighty. What do you know? Is this the same sophisticated and fragrant Margot who set off the somewhat catastrophic trend of pro-EU arguments along the lines of sign up to the Constitution or we shall end up with another Holocaust? Alas, despite all twistings and turnings by her spokespeople and moderators, it is the same person.

Maybe her fluffy bunny mode is actually more useful than her sophisticated one.