A humdinger of a story about corruption is enmeshing the part-French government owned Thales defence contractor, a multibillion dollar international enterprise which rejoices in the slogan "The world is safer with Thales".

It is facing allegations from Michel Josserand (below), former chief executive of Thales Engineering and Consulting (THEC) that it paid out millions of dollars in bribes and sold chemical weapons to the former Iraqi regime of Saddam Hussein. Josserand has also told police investigating Thales that the company took part in the construction of an Iraqi chemical-weapons plant disguised as a factory that made powdered milk.

In an interview with newspaper Le Monde, yesterday, he went on to claim that the paying of bribes by Thales was widespread - in violation of French law and international conventions. Josserand estimated that Thales pays out between 1 and 2 percent of its global revenue ($12.5 billion in 2004) in illegal commissions, having constructed a secret internal system to make the payments.

The Thales Group has "categorically and totally" denied the accusations and has decided to take immediate legal action for defamation against Le Monde and Josserand.

Nevertheless, Paris prosecutors are investigating the corruption allegations, which surfaced after irregularities were discovered in the company's bid to build a light railway in the southern French city of Nice. Josserand, whose THEC division won the contract, was fired by Thales and placed under formal investigation in May after the group filed a criminal complaint against its former employee.

Josserand now describes himself as a scapegoat now living in fear for his life and has said he has informed police about bribes paid out for contracts in Greece, Argentina, Asia and elsewhere in France - often via several foreign intermediaries such as construction companies.

"Having said that, Thales was only following the practices of the major U.S. companies," he said. Thales had little choice but to pay bribes if it did not want to be excluded from markets, he also said. 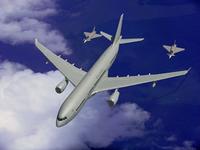 The accusations come at a bad time for Josserand's current employer, the European Aeronautic Defence and Space Company (EADS), which is bidding for the prestigious US Air Force air tanker contract, after it was withdrawn from Boeing following irregularities in the initial award. EADS is now considering whether to dismiss Josserand, but it will have to move fast if mud is not to stick. The company is already facing new difficulties following its decision, as 80 percent owner of Airbus, to seek launch aid from European governments to develop its A350 airliner.

In the US Congress, the word is that this bolsters chances that the Senate will approve legislation already passed by the House to prohibit the U.S. military from buying Airbus tankers. Any association with corruption, however tangential, will not improve its chances.

The allegations are also potentially embarrassing for the MoD, which has just awarded a major contract to Thales for development of the Army's £14 billion Future Rapid Effects Systems. Thales is also prime contractor on a number of prestige British defence contracts, including building the UK's "Watchkeeper" unmanned aerial vehicle.

How ironic it would it would be if the MoD's "Europe first" procurement policy was tainted by corruption.