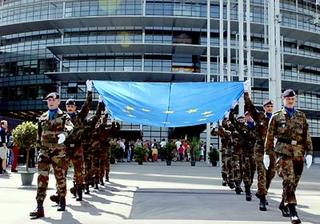 In his column in The Sunday Telegraph today, Booker picks up the threads on the extraordinary but largely unreported developments on EU defence issues.

Noting that, despite his grandiose rhetoric last summer, it may now be as obvious to his EU colleagues as it was predictable at the time that Tony Blair plans to do as little as possible with his six months as the EU's President, Booker then remarks that the Finnish presidency is preparing to take a different view.

Picking up from this blog, he reports that Finland's prime minister, Matti Vanhanen, is highly alarmed at the EU's drive to establish its own "defence identity", independent of Nato and the US. Finland, he writes, will use its presidency, he says, to rebuild "political and defence bridges between Europe and the United States", which he fears are crumbling.

Booker also pick ups on our report that a Chinese state company has been set up to play a key role in operating Galileo, the EU's navigational satellite system, in which China already has a 20 per cent share. This is significant because the Galileo project, planned as a rival to the US GPS system, is at the very heart of the EU's defence identity.

Continues Booker, just as worrying to Washington is that the EU, after the recent Beijing summit, has now formed a "strategic partnership" with China, America's most obvious potential enemy.

He tells us that, last week, General Lance Lord of the US Air Force Space Command last week announced plans to "to deploy an electronic warfare unit capable of jamming enemy satellites". It was obvious, says Booker, which satellite system he had in mind.

In fact, this is something we flagged up last October, when we drew readers attention to US Air Force Doctrine Document 2-2.1, issued on 2 August 2004, entitled Counterspace Operations.

In the foreword to that document, the Honourable Peter B Teets, Undersecretary of the USAF stated that "space is the high ground" and talked about "denying that high ground to our adverseries". He went on to ask: "What will we do ten years from now when American lives are put at risk because an adversary chooses to leverage the global positioning system of perhaps the Galileo constellation to attack American forces with precision?" 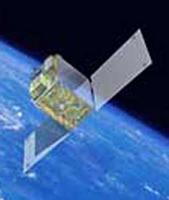 Even then, the USAF had started development on a range of "micro-satellites", with the potential to destroy enemy spacecraft, so small that ten could be loaded in a reusable military orbiter and despatched into space.

This was the XSS-10, which was successfully launched on 29 January 2003. In April of this year, its successor, the XSS-11 (see above right), was test flown. It is undoubtedly this vehicle that gives substance to General Lord's announcement that the US has plans to "to deploy an electronic warfare unit capable of jamming enemy satellites". It may not even be jamming, he has in mind, as the XSS-11 could just as easily carry an explosive warhead which could blast Galileo out of the skies.

It is closer towards that day that EU president Blair has taken us. So, remarks Booker, it is all very well for his EU colleagues to accuse Mr Blair of doing nothing as President. But it was he who signed the deal in Beijing last month which could range Britain and the EU on the side of their new "strategic partner" in any future war.

Britain's presidency may turn out to have made a rather more significant contribution to history than we will one day care to remember which, at the current rate, will see our soldiers in blue cravats, mincing around with an EU flag outside the European Parliament, while US satellites blast us out of space.