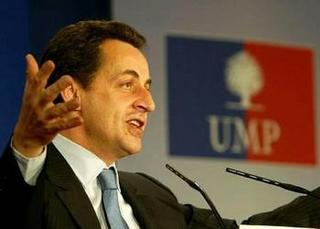 You will never go far wrong in this world if you stick to the dictum: "never trust a French politician" – even, or especially, if his name is Nicolas Sarkozy, the president of the UMP party and a strong contender for the French presidency in 2007.

So when, during a speech on Saturday, concluding a party conference on Europe, he declared that the French-German "couple" should no longer direct the EU in the way it had done for the previous 50 years, you have to wonder what his real motive is. "We must open the French-German couple to four other big European countries, which among them represent 75 per cent of Europe's population," he says. "This group of six must become the motor of the new Europe."

Apart from anything else, this will rather tick off the other 19 countries, and flies in the face of the "Community method" which accords more status to the smaller countries than strictly their size would merit.

But friend Sarkozy even has a name for his directoire, the "G6" - France, Germany, the UK, Italy, Spain and Poland. It should make collective proposals to other EU leaders, which the other members could accept or reject. That really would go down well with the Commission which has the sole right, under the Treaties, of making proposals.

Nothing of this seems to faze little Nick. "If we are able to develop this method," he said, "we would answer - without institutional reform - two major defects of Europe as it exists today: Europe would act, and she would act under the impulse of responsible politicians, not anonymous bureaucrats."

It, according to PDB, should take the lead on economic and monetary policy, defence, foreign policy, internal security and justice, notwithstanding that . "It is indispensable that those states that want to do so can progress together and more quickly, while leaving open the possibility for other members to join them later," he said. "This common project, this 'house within a house', will be more integrated, more demanding, more concentrated."

Back to our Nick, who describes himself as the leader of France's most pro-European party, he also proposed several other initiatives to haul the EU out of the "grave crisis" caused by the rejection of the constitutional treaty by French and Dutch voters. He said the EU's ambition should be to exploit the benefits of globalisation, while countering its injustices. "Europe must invent humane globalisation," he said – whatever that is.

The Union, according to Sarkozy, should promote research at an EU level, helping to found European universities. It should also co-ordinate policy to address such issues as energy, health, immigration, and ageing populations.

And, to demonstrate that we really cannot expect anything significant by way of a free trade agenda should he get elected president in 2007, the man called for the revival of the "community preference" ensuring that "Europe bought European" goods - especially from its small companies. That invoked criticism of Mandelson for failing adequately to defend Europe's interests. The EU should make more use of the World Trade Organisation's anti-dumping clauses, said this supposed free-marketeer.

Rounding off, Sarkozy then defended the CAP and attacked the British budget rebate as an anomaly that had to be suppressed. He also repeated his opposition to Turkey's ambitions to join the EU, a goal supported by L'Escroc and the UK.

Plus ça change, and all that.