Another contender for the Tory leadership has put forward his manifesto today. Dr Liam Fox, the Shadow Foreign Secretary, though this might surprise some people, has published an article in today’s Daily Telegraph, setting out his wares.

Some wag of a sub-editor gave it the title Britain must control its own destiny. Of course, her own destiny would have sounded better but let us not quibble. The real problem is that there is nothing in the article that develops the theme of the heading.

We get three paragraphs of the compulsory “we Conservatives must stop looking inward and start telling people what we stand for” line. To which one can reply stop telling us that you must tell us what you stand for and start telling us what it is you do stand for. Alas, Dr Fox does nothing of the kind.

Similarly, there is no point in saying:

“We need to make the case that lower taxation is vital to creating the business climate that will shape our economic future.”

As we kept saying to Britain in Europe and shall go on saying to the European Movement, just make that case. Don’t tell us that you need to make the case. We know that. It is the Conservatives’ inability to make any case for anything that prevents people from voting for them.

The fact that Dr Fox is has no real idea what Conservative policy should be about is displayed early on:

“We need to build a Britain that is dynamic, innovative and entrepreneurial,that invents and reinvents. We need new ideas on which we can build new businesses and to strip away the state-imposed barriers that hold them back. We need skilled and talented people to shape our future successes.”

Well, errm, no, Dr Fox. You cannot build a dynamic, innovative or entrepreneurial anything. You are a politician. Your party is a political party. Dynamism, innovation, entrepreneurship comes from people who actually create something, whether it is financial services or organic bread. A Conservative government should simply aim at getting out of those people’s way, not imitate the failed Lisbon Agenda, which was based on the notion that economic dynamism could be quantified and ticked off in a series of boxes. 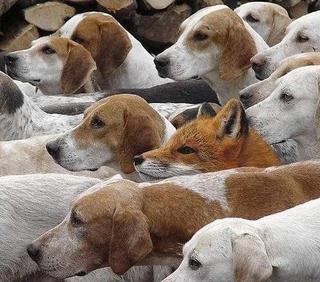 Right. We have little social cohesion in the country and a great deal of truancy. All of that needs to be dealt with. How? Ah, we are not told by Dr Fox (seen here in his natural environment). It is enough for us, the would-be voters, should he become leader, to know that he has noticed these problems and decided that they need to be dealt with. Welfare reform? Taking education away from the state? Don’t bother me with details. This is blue sky thinking. Well, all I can say is there is stormy weather ahead.

Then again Dr Fox is Shadow Foreign Secretary. (What happened to the last one? Oh yes, he went to Defence.) So, maybe he has some ideas about foreign policy. Indeed, here is his policy on Europe:

“Britain also needs to re-acquire the self-confidence to take its rightful place in international affairs - that is, centre-stage. We must break free from the shackles of the utterly Euro-centric view that Britain has taken of the world in recent decades.

In June, I made it clear that I do not believe in "ever-closer union". Britain's destiny does not lie in a United States of Europe. Our vision is of a much looser association of sovereign states, characterised by the economic values I outlined earlier. If Europe fails to reform, the price will be very high. China and India are changing the world we live in, producing high-quality products at a fraction of the price that we can and building service sectors that are also sucking business away from us.”

Sounds good. What does it mean? How is Britain going to take centre-stage on anything if our defence procurement is ever more closely integrated with the European defence structures?

How are we to extricate ourselves from that ever-closer union that Dr Fox does not believe in? It is going ahead and we have had no ideas from the Conservatives (with the exception of Lord Tebbit who is not, alas, a contender) on how the process is to be stopped and, preferably, reversed.

The economic values are all about less taxation and less regulation but, frankly, who is going to believe that? Not anyone who looks at the Tory record in government or tries to find out from Dr Fox what he is going to do with the existing regulatory structure, inspired largely though not wholly by the EU and implemented by our own civil servants and quangoes.

“Under my stewardship, Conservative foreign policy will always seek to strengthen democratic principles around the world, in pursuit of what I call the "Freedom Agenda". Democracy is not just the ability to put a cross in a box now and then; to be strong and survive, it has to be underpinned by a free market,respect for the rule of law and human rights.”

Excellent if vague, one might think. Well, one would think until one read the next paragraph:

“Likewise, we must take a lead in meeting head-on the challenge of global warming and the threat to our environment. This is a crucial issue for the younger generation in particular, and one that the Conservative Party must be at the forefront of addressing. The last Conservative government took a lead over key environmental issues such as reducing emissions and protecting biodiversity.

We must be Conservative with a small "c" as well as a large one.”

That, presumably, means that under Dr Fox’s “stewardship” the Conservatives would stick with the benighted Kyoto agreement, having not bothered to look at any of the more modern and interesting ideas around, not to mention more up-to-date literature. One can be conservative with a small or a large “c” but there is no need to be backward.

“This is what my leadership would be about: sound defence; keeping more of what you earn; less government interference in people's lives; a sense of family,community and respect for the law; Britain controlling its own destiny.”

At least, he does not tell us that the Conservatives must think about power and not ideas but then, apart from assuring us that he is “against sin” of whatever kind, Dr Fox does not tell us anything very much.

We all know there are serious problems in this country. What we are looking for is some indication that politicians who would be Prime Minister have thought of some way of dealing with them.