A step too far? 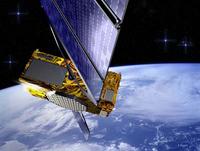 The state-controlled China Galileo Industries (CGI) is bidding to take over the operations of the EU's Galileo satellite positioning system in the Chinese region, giving it full control of all the systems. This will include the ability to provide targeting information for its new-generation cruise missiles and the sophisticated military command and control systems under development.

This was reported last night by the Xinhuanet news agency, which cited Meng Bo, chair of the board of CGI, saying, "We're trying to get the operation franchise in China, which might begin in 2008." 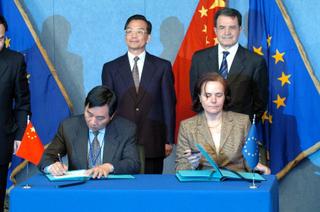 With China already a full development partner, having signed an agreement with the EU in May 2004 (see right), this latest move follows the agreement earlier this month at the 8th EU-China Summit to hold "detailed talks on the conditions related to China's joining of the European GNSS Supervisory Authority", giving the Chinese government a say in the global management and control of the system. Now, the Chinese are aiming for total control within their own areas of stategic interest, giving them the ability to deploy their high-tech missiles without fear of the EU shutting down to guidance signals.

Significantly, Meng Bo compares Galileo with the US system, stating: "GPS is mainly for military use and some civilian use, while the Galileo systems will be mainly for civilian use and be responsible for customers so as not to shut off signals without our customer's consent." The inference is clearly that the Galileo is intended for military use and signal continuity is a vital factor for the Chinese.

The Chinese military are believed to have test flown the X600 Land Attack Cruise Missiles as early the 1990s (see left) but, so far, they are reliant on the US GPS system to provide precision guidance. This renders the missiles vulnerable to jamming of the unencrypted civil signal yet, without this facility they are significantly less accurate

The Taipei Times reported in June that China's new class of LACM (right) could reach 200 deployed against Taiwan while the Hsiung Feng II-E, a 1,000km-range LACM, was then reported to have just completed a successful test. Use of the EU’s Galileo signals and the control over the high-precision Public Regulated Signal (PRS) will ensure accurate targeting, free from the risk of the system being shut down, while the EU has also provided extra “hardening” measures to minimise interference.

The agency report will fuel suspicions in US circles that the EU - which considers itself a "strategic partner" of China - is progressively strengthening its Asian "partner" in order to dilute US influence in the region and strengthen its own. Part of this EU-China alliance is, of course, the UK, which is also funding the Galileo programme. Yet, at the same time, the UK is expecting the US to release secret data on the Joint Strike Fighter (JSF) programme, despite risks of technology leakage to China.

With the ever-strengthening relationship between China and the EU, however, the UK is being dragged further into the China sphere, and arousing increasing distrust in US circles. With crucial production decisions having to be made on the JSF by the end of the year, the US might consider that this current development is a step too far and cut the UK adrift.