As chosen by Eurocorps 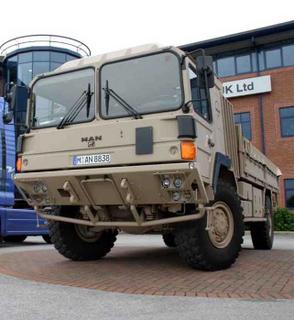 Have a good look at the picture on the left. It shows an Army truck assembled at the Vienna plant of MAN Nutzfahrzeuge Österreich AG in Austria, and you are going to see an awful lot of them over here. The MoD has chosen these to equip the British Army, and 5,200 are to be delivered between 2007 and 2013. The contract is worth £1.1 billion and the MAN website happily chirps that it "ensures a continuous workload for the Vienna plant and thus helps to safeguard jobs" – Austrian jobs.

The fact that the MoD should have bought vehicles from a German-owned firm is, we have argued, one of the strands of evidence that demonstrates that this government has adopted a "Europe first" policy when it comes to defence procurement, an issue to which Booker has referred in his columns. But last week, former MoD official and now Iveco employee Mr Andrew Simpson of Bath took Booker to task in a letter, declaring that "impartial observers generally agree" that the MAN vehicles were far the best for the role.

In this week's column, Booker takes on board Mr Simpson's claim, noting that it seems "odd" to assert that "impartial observers" generally agree that the MAN vehicles selected were the best. This is because among those highly critical of this choice were the National Audit Office, which found that in two crucial respects they did not match up to the Army's requirements. They were not capable of meeting "Defence Planning Assumptions" nor "capable of operating in world-wide climatic conditions", the latter directly contradicting the MoD claim that "the vehicles will be capable of transporting large quantities of bulk equipment to our front-line troops wherever they are operating in the world."

What precisely is meant by "Defence Planning Assumptions" is not known, although we intend to find out. Nor do we know very much more about the contract, as the details are "commercial in confidence". 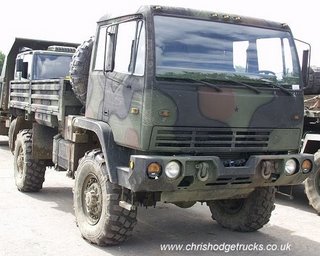 What we do know, however, is that the lack of capability to operate "in world-wide climatic conditions" is a serious deficiency. Designed for western European conditions, the MAN truck is not able – without substantial modification – to operate in theatres like Iraq. On the other hand, we do know that one of the competitors, the Stewart and Stevenson FMTV series (pictured right), is fully equipped to operate in any theatre, without modification. On these grounds alone, it is a better choice.

The production company itself had teamed with UK firms LDV Limited, Multidrive Limited and Lex Defence, in order to bid for the contract. It intended to build the trucks in Birmingham, giving the contract a high British-design and build component. Furthermore, the firm Multidrive is a specialist in off-road industrial vehicles and contracted to develop the Future Cargo Vehicle for the US Army.

The other unsuccessful competitor (also pictured right), is produced by Oshkosh Truck Company, based in Wisconsin. However, it has a British subsidiary in Llantrisant, Wales where much of the manufacturing would have been done there. In this plant, the company is already fulfilling a contract for wheeled tankers and tank transporters for the British Army.

When bidding for the contract, Oshkosh announced that it would work with other British industrial partners, including ABRO, formerly the Army Base Repair Organization). ABRO would assemble cargo bodies, provide vehicle integration and deliver the in-service support and associated functions. Oshkosh would also transfer vehicle production technology and processes to ABRO. Having failed to gain the contract, ABRO was recently reported as having to shed 150 jobs, not many less than MAN claimed to be employing on the British end of the contract.

What the MoD appears to have done, therefore, it purchase a truck which did not meet its own specifications, and one which had the lowest British manufacturing and design component of all three main bidders.

But, perhaps most important of all, both Oshkosh and Stewart and Stevenson supply to the US Army and Marines, the latter having delivered over 29,000 trucks from their range. Many of these have been deployed in the arduous conditions of Iraq and Afghanistan and, as the contracts have progressed, both manufacturers have made a substantial number of modifications to their equipment, reflecting the experience gained.

Last week, I had a lengthy conversation with an expert in military vehicles, who told me that battlefield experience was vital in developing a reliable product. For that reason, he said, either of the US trucks would have been a bargain. In additional to getting the trucks, the MoD would have benefited from the fruits of hundreds of millions of dollars of research and development, carried out by the manufacturers and the US government under battlefield conditions, for which they would not have to pay. Yet Britain has rejected what could be lifesaving knowledge, opting for a vehicle that lacks battlefield exposure and is clearly substandard.

"Such is the price," writes Booker, "that the Army and we must now pay for Mr Blair's headlong pursuit of what is known as the 'European Defence Identity'." Perhaps it helps to know that the MAN vehicle has also been selected by Eurocorps. We shall be known by the company we keep.