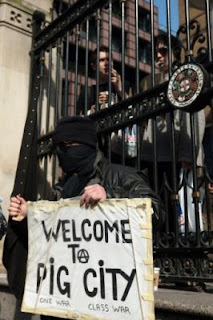 Preoccupying the media today are the protests in the City over the G20 summit, with "thousands of police officers" ready to deal with a series of demonstrations if violence erupts.

The prospect of violence has been signalled so much in advance that the police are undoubtedly well-prepared and is unlikely now that we will see anything more than the occasional, well-contained scuffle from a rag-bag of anti-capitalists, environmentalists, anarchists, anti-war campaigners and others.

As for the summit itself, this is mere theatre – another episode of the soap opera. What the "leaders" say openly for public consumption, what they actually agree behind the scenes, and then what they actually do – or are capable of doing – will be completely different things.

We are but the audience for this grand theatre, and indeed the paymasters for the extravaganza. But the actual cost of the summit is merely the down payment. The real bill will come later, the amount of which we will never be allowed to know.

As for the reckoning, that will come even later, but it will not be a bunch of dysfunctional renta-mob antis that deliver it.