The risk of failure 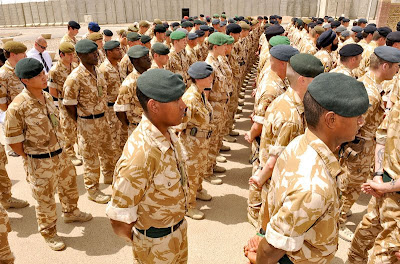 By linking the final stage of our ignominious retreat from Iraq with a memorial service, honouring the British troops who were killed, the military and government both thereby achieve the effect of blunting criticism of the war.

Any such criticism, especially of the military, can easily be dismissed as heartless or insensitive, given that so many have put themselves in harm's way and many have paid the ultimate price.

Given also that this current government is in a terminal stage of decay, it is thus easier to focus attention on the political failures – of which there were many – staying any criticisms of the military, for fear of offending the sensibilities of those who knew or were related to the fallen.

There is also a strong political element here as well. The manifest failures in Iraq serve as a useful stick to beat the current government and to enjoin the military as partners in a collective failure dilutes the attack on the politicians. It is thus tactically advantageous the position the military as innocent "victims" of political machinations, rather than clinically to apportion blame where it lies.

The fact is though, however much it is spun, the counter-insurgency campaign in Iraq was a British failure and the responsibility for that failure lies both with the politicians and the military.

Where exactly that dividing line lies has yet to be determined and it will be many years and take much study and argument before all the issues have been rehearsed and the final resolution reached – if ever. I have made an attempt at an analysis in my book, Ministry of Defeat, due out in June.

In it, I readily acknowledge that, as a second draft of history, it will have flaws, but it is an honest and so far the only attempt to chart the complete history of the British occupation of Iraq.

Of the coverage in the media today, the Evening Standard best cuts through the cant, with a comment piece headed "Our inglorious retreat from Iraq", noting that, even allowing for the professionalism of British forces, innumerable acts of courage on the part of individuals and high aspirations from their commanders, the reputation of the Army has been diminished, not enhanced, in southern Iraq.

This supports a piece by Andrew Gilligan under the title: "The lessons of Basra are: do something properly or not at all". In this piece, however his focus is on the events of Basra, and thus lacks the historical context of the campaign as a whole, where the seeds of defeat were not sown in Iraq's second city but earlier in al Amarah.

Thus does Gilligan aver that Basra was a historic humiliation for the British Army a shaming contrast to the behaviour of the Americans, who also suffered reverses in their sector of Iraq but reinforced, fought back strongly and eventually prevailed.

In this blinkered fashion, he then argues "It wasn't the Army's fault: our soldiers are no cowards. It was the politicians in London who gave up, not the frustrated troops on the ground. Where there is, however, fault on the military side is in their current attempts, publicly at least, to deny the reality of the operation that ended today."

Gilligan is wrong in one sense. It was the Army's fault – in part at least. Although the politicians seen the framework for defeat, the situation up to mid-2006, with inspired leadership and more intelligence and flexibility than was shown, was recoverable.

But where Gilligan is right is in pinpointing the attempts of the military to spin the operation as a success. That denies the opportunity of conducting a frank, open and searching post mortem and thus limits the ability of the military to learn the lessons from its own mistakes – some of which it is currently repeating in Afghanistan.

Acknowledging failure, as Aaron Wildavsky once wrote, allows for the concept of "useful" failure. Citing the engineer Henry Petrovski in his support, in the context of civil engineering disasters, he noted:

...the lessons learned from (those) disasters can do more to advance engineering knowledge than all the successful structures in the world. Indeed, failures appear to be inevitable in the wake of prolonged success, which encourages lower margins of safety. Failure in turn leads to greater margins of safety and, hence, new periods of success.

What applies to engineering applies to the military, as it does all other walks of life. The absence of information on failure leads, in the long run, to increased risk of failure. The risk of failure in the future is too high for us not to acknowledge and learn from the failures of our past.