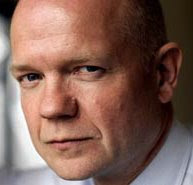 One cannot be sure whether it is The Times or little Willie but someone here is fanatical about recycling.

We read what at first sight looks new. William Hague, we are told, yesterday became the first member of the Tory leadership to predict a Conservative victory next year and said that his party was psychologically prepared for government.

Then we are told that the man named by David Cameron as his "deputy in all but name" went farther than before in suggesting that a Tory government would kill the Lisbon treaty and halt the latest process of European integration. He promised, says The Times "immediate legislation for a referendum to reject the treaty if it had not been ratified by the whole of the EU by the time that the Conservatives took power."

And then we get the punch line: "He left open the door to the possibility of the Tories promising a referendum in their election manifesto even if the treaty had been ratified by then."

In other words, nothing is different. Nothing has changed. One seriously wonders why this was published, or have we missed something?