A diet of riches 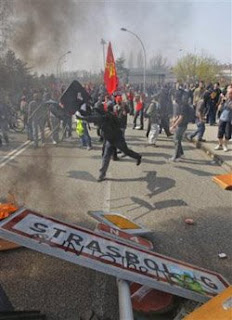 For once, we would accept that the MSM have got it right, in putting the Nato talks in Strasbourg at or near the top of their agenda. Not only is it the 60th anniversary of that organisation, there are many other things going on.

Apart from the major riots in the city, there is division over the new leader and Obama is in town.

Not only that, Afghanistan is at the top of the meeting agenda, Brown seems to be promising more British troops, our Chief of the Defence Staff is accusing our Nato allies of not pulling their weight, and there is new concern over Afghan women's rights after the passage of a controversial new law.

All of this makes for a heady cocktail, which has steadily been building as the issues pile up. As an aside, that makes it all the more remarkable that Liam Fox failed last week to mention Afghanistan once, on what was billed as a major defence speech. It is also noteworthy how little attention is being given to the issues by the British political blogosphere – as always. But then, we must accept that most no longer do "big issues".

In a way, reluctance to engage here is understandable. With a diet of riches, it is difficult to know where to start, what specific issues to address, and where best to make useful interventions. However, there is one towering matter which transcends all. As it stands, we are losing the war. Very few serious, knowledgeable people dispute this.

What is needed to turn the war round is political will – which makes this primarily a political rather than a military issue. And the wrong decisions are being made. Over this weekend, therefore, we are going to devote a few posts to their discussion.