Where does Britain stand? 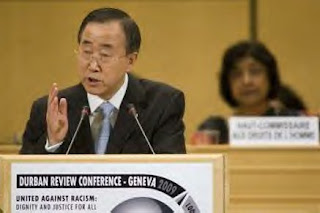 Things do seem to be linked with each other. Just as I started reading up on the latest news about Durban II there was a call from the BBC Russian Service. Could I come in and take part in a discussion about the British position? Well, I could certainly take part in a discussion (what else do I do with my life?) but finding out what the British position was might be a little more difficult.

We have written about the first Durban conference and its deranged participants who turned it into an anti-American, anti-Semitic and, generally, anti-Western festival here and here. (The best site on which the whole farce can be followed is UN Watch. At least it would be a farce if it were not so tragic. We are, after all, funding this appalling event.)

After a certain amount of humming and ha-ing, the United States has, it would appear, decided to boycott the Conference, not least because Secretary of State Clinton might not have wanted the sort of abuse that was hurled at her predecessor, Colin Powell, at the original Durban conference.

President Obama's decision may have annoyed the tranzis who, naturally enough, do not like to see their favourite president follow in the footsteps of their least favourite one, but has the support of various members of the House:

Last week a bipartisan group of House members sent a letter to Obama congratulating him for deciding to boycott the meeting, which is scheduled to begin Monday.

"We applaud you for making it clear that the United States will not participate in a conference that undermines freedom of expression and is tainted by an anti-Zionist and anti-Semitic agenda," said the letter signed by seven members of Congress.

Voice of America confirms the non-attendance:

State Department Spokesman Robert Wood says the US will boycott the conference "with regret" because of objectionable language in the meeting's draft declaration. Wood said Saturday that despite some improvements, it seemed clear the declaration will not address U.S. concerns about restrictions on freedom of expression.

Given that the committee organizing the conference was chaired by Libya, freedom of expression is unlikely to have ever been high on the agenda.

I shall write later on what is going on in Geneva at the Durban II conference and it seems to be rather entertaining. In the meantime, let us have a look at Little Green Footballs, which is listing the countries that are boycotting this noxious event.

Here we go: Australia, Sweden (with Canada and Italy having joined Israel and the United States before), Netherlands, Germany and New Zealand. Poland has announced its boycott as well. There may be others but that is plenty.

Wait a minute. There is a country missing. What is Britain's attitude? Clearly, we are not boycotting or Charles Johnson would have noted that fact. Maybe he has simply missed the announcement. After all, even Homer, they tell us, nodded.

No he missed nothing. Not that I would expect him to – I was just trying to let hope win over experience. Britain is ratting on her allies going to the hate-fest Anti-Racism Conference, organized by the committee chaired by Libya at which President Ahmadinejad, for one, is expected to launch his usual anti-Semitic rant and other delegates are expected to applaud or, at least, look neutral. Quite appropriately, that event will take place some time today, the anniversary of Adolf Hitler's birth.

We are not sending a very high level delegation but not a particularly unimportant one either. It is led by Peter Gooderham, British ambassador to the UN in Geneva. A nicely judged effort of fence-sitting diplomatic compromise. According to the official explanation, the Foreign Office is "watching how things will develop".

The spokesman said Britain wanted the conference "to get a collective will to fight racism now" but was "under no illusions about the scale of this challenge."

"We wouldn't be able to support a process that was skewed against the West or other countries," the spokesman said, adding that Britain had certain "red lines" on the issues involved that it would stick to.

"We have argued for the concluding document to have sufficient (content) on the Holocaust and combatting anti-Semitism... we would find it unacceptable if the process seeks to deny or denigrate the Holocaust".

Ah yes, those red lines. How reassuring to hear that phrase again. Remind me, how did it work out last time?

France, apparently, is also sending a delegation and this, according to The Telegraph, shows a rift in the EU. Bernard Kouchner, who is leading the delegation, has warned that they would leave if the Iranian President starts making racist or anti-Semitic comments. Given the man's track record that seems an absolute certainty.

The Italian Foreign Minister, Franco Frattini, has made it clear that it would have been better if the EU member states had stayed together and followed a common line, preferably that of a boycott. One must admit, that Common Foreign Policy is not looking very good at the moment. But when did it? I am afraid, in this case we cannot blame the EU for our own government's pusillanimity.