Closer than it thinks 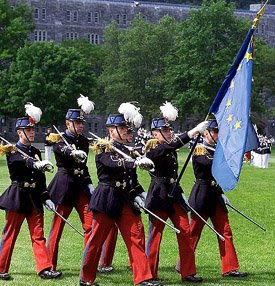 In The Daily Mail today, the alarm is raised about the European Rapid Reaction Force.

According to the paper, Europe minister Caroline Flint has said that every operational unit of the British Army, the Royal Navy and RAF will be on offer as part of an EU "force catalogue". For this, it is relying on a response from Flint to questions from the European Scrutiny Committee.

There, she said: "We are prepared to provide all our forces that are suitable for operations within the EU level of action." This, says The Mail, "suggested that the entire Army, Navy and RAF will be put at the EU's disposal - with the likely exception of Trident submarines carrying Britain's nuclear deterrent missiles."

The paper, however, is playing word games. Flint's words were perhaps ambiguous, but the key part was "all our forces that are suitable for operations…".

By "suitable for operations" is – to anyone who has even slight knowledge of what is entailed – meant deployable forces. And, as we know from recent experience of Iraq and Afghanistan, that comprises only a fraction of the total military resource.

In fact, therefore, nothing has changed. The extent of our commitment was set out on 16 Jan 2003, in a Parliamentary response from Geoff Hoon, who declared that we were:

… offering to make forces available to meet requirements identified in the Helsinki Headline Catalogue as necessary to enable the EU to undertake the full spectrum of Petersberg tasks. The potential British contribution could be up to 12,500 troops, 72 combat aircraft and 18 warships, with a full range of supporting capabilities. At the Capabilities Improvement Conference in November 2001, along with other member states, the United Kingdom increased its potential contribution in areas where capability shortfalls were identified.

Although we fielded 43,000 troops for the 2003 Iraq invasion, this represented the maximum effort of which the military was capable. And it was a short-term commitment which was unsustainable in the longer term.

The ERRF commitment is for up to a year, and it is calculated that to maintain the overall force size of 60,000, with rotating replacements, the actual manpower requirement is closer to 180,000. In addition, there would need to be home-based supporting elements and logistic support. On the basis of a three-times multiplier, therefore, we are effectively committing the bulk of the UK's long-term deployable forces – and have been since 2003.

Nothing has really changed – other than, perhaps inadvertently – Flint has told it "like it is" and The Mail has at last caught up with the reality.