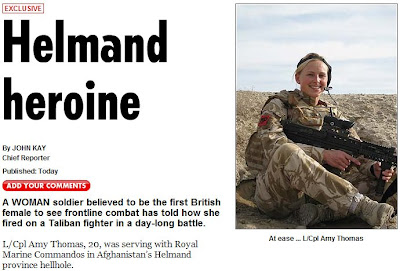 In the train wreck that constitutes the British media, the story of the day from Afghanistan is how "girlie girl" L/Cpl Amy Thomas, 20, serving with Royal Marine Commandos in Afghanistan's "Helmand province hellhole", loosed off a burst of shots with her SA80 rifle "after being flown into a notorious hotspot with comrades."

Although this must be of some antiquity – the Royal Marines have already returned home – this is recounted in loving detail by The Sun, under the by-line of super-hack John Kay, no less, billed proudly as an "exclusive".

This is investigative reporting at its best, brought to us hot off the MoD's "feel-good files", The Sun's reward for being good boys, getting the nod and the wink from the MoD before their rivals get a taste of the story. But so good is a "girlie with a gun" story that it was not long before The Daily Mail got in on the act, followed by The Daily Telegraph. They have both cribbed the story from The Sun in what passes for serious journalism these days - the motto being "where the Sun leads, we follow".

Meanwhile, back in the real war – entirely unreported by the kiddies korner media - we have another report of the Taleban deploying an anti-aircraft gun in the Lashkar Gah area. This is the third such incident, the first two reported last week when they were taken out by A-10s and a precision air-strike.

This time, the gun was a ZPU-2 (the twin-barrelled version of the guns previously reported). It was being towed by a tractor and was taken out by a US Air Force MQ-9 Reaper, which fired Hellfire missiles. Both the tractor and the gun were destroyed. Later, a US Air Force B-1B Lancer bomber flew several shows of force and expended flares to prevent an enemy force from assembling for attack near "a coalition forward base."

That is a British base and Lashkar Gah is in the heart of the so-called "security triangle" where, according to the MoD troll infesting the Booker column comments, ISAF has been "able to deliver sufficient security to enable the delivery of reconstruction and development aid by civilian agencies."

These incidents, however, only happened on Sunday. Yesterday, we saw a similar story, when US Navy Hornets and Super Hornets employed GBU-12s and strafes to hit enemy gunmen shooting from fighting positions in compounds and a tree line.

These strikes, we are told, caused the enemy personnel to stop firing on coalition personnel. An additional F/A-18E performed a show of force over an enemy compound during the engagement to suppress enemy fire.

Not only was this happening right at the heart of the supposedly ISAF-controlled territory, that day some 80 close-air-support missions were flown in support of ISAF and Afghan security forces, reconstruction activities and route patrols. That is currently about twice the rate strike missions are being flown compared with last year and, if such activity is a useful metric of enemy activity, then clearly the operational tempo is increasing.

Nothing of this, of course, is allowed to trouble the minds of the "kiddies korner" media. Readers will recall that, even as the last two anti-aircraft guns were being taken out, we were being regaled with the derring-do of Colour Sergeant Michael Saunders, Platoon Quartermaster Sergeant for the Combat Infantry Signals Platoon.

He had been writing his war stories from the safety of his signals cabin in Camp Tombstone and had become "the talk of his local town" after he had started sending regular letters back to his local pub describing daily life on the "front line".

Entertaining though such stories are, the inability of the British media to offer anything approaching hard news is turning the fourth estate into a parody of itself. Next topic on the agenda, dare we predict, is The Sun reporting how one of our "Brave Boys" farted in the showers in Camp Bastion – another "exclusive" by the fearless Tom Newton Dunn – while the Chinese News Agency reports the real news.