The escape from kiddies korner 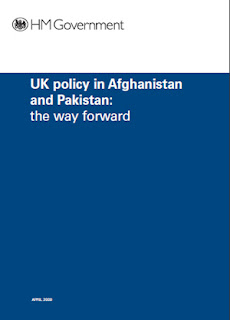 So it is done. "What we are trying to do is combine the measures, militarily and civilian," says Gordon Brown in today's statement, something which gets close to joined-up government, even if it is many thousands of miles away.

With Nick Clegg reminding the House that, "Public support for the conflict is under strain", the statement trailed the publication of the document "UK policy in Afghanistan and Pakistan: the way forward", setting out the clearest statement yet of where we stand in this troubled corner of the world.

A mere 32-pages including the covers, the relatively modest length belies its depth. Its main claim to fame is to offer a seam-free approach to a unified policy which encompasses both Afghanistan and Pakistan. Looking for clues as to a change of direction, however, what stands out is the remarkably candid appraisal of the current status. Thus states the document:

The security situation in Afghanistan remains serious, particularly in the south and east. Insurgents are unable to defeat international forces directly, or Afghan forces where they have international support.

But the insurgents' switch to asymmetric attacks (against which international and Afghan forces can only provide the population with a certain degree of protection); their access to havens across the border in Pakistan; and the combination of poverty, lack of good governance, weak rule of law, lack of progress on reconciliation and social and economic development, and perception of widespread corruption, mean that the insurgency has not been delivered a decisive blow.

The local population therefore lacks sufficient confidence actively to back the legitimate government against the insurgency. Without an improvement in security, particularly in the south and east, sustainable progress in Afghanistan will remain difficult; and what progress there has been so far will be put at risk – as will wider regional stability, and our own national security.

But, while what few headlines we have so far seen concentrate on the temporary boost in troop levels – with 700 more to be deployed to provide security during the forthcoming presidential elections - of much more long-term importance is this little nugget buried in the strategy:

We will support the Afghan government by investing in stronger markets that will promote an entrepreneurial business culture. To assist the vast majority of Afghans who live in rural areas, we will increase our support to agriculture and rural development, including transport to market, and support for access to international markets for agricultural exports.

In particular, Helmand province, with its abundant natural resources, has the potential to be a centre of agricultural production and growth for Afghanistan. To help realise this potential, we will invest £68m over the next four years in agriculture, rural enterprise development and infrastructure.

Current projects include: a major road-building programme linking Lashkar Gah to Garmsir, Nad-e-Ali and Gereshk; the refurbishment of the Gereshk hydropower plant (as part of a wider programme to double electricity production in 2009-10); and agri-business infrastructure in Lashkar Gah (funded by the US).

This might by some be considered as coming under the category "too little, too late" but, given that these developments will be almost completely ignored by our kiddies korner media (to say nothing of the increasingly trivial korner of the political blogosphere), it is remarkable that there has been any progress here at all. Crucially, we then see this:

We will also continue to support the Afghan government to deliver basic services, such as health and education, by providing direct support to pay the salaries of teachers and other key workers. In parallel, we will build the government's capacity to collect taxes so that, over the longer term, it can begin to reduce its reliance on international support.

The first sentence is interesting. For too long, there has been money spent on rapid impact projects, building schools for the photo-opportunities they afford, only for them to remain unused or not fully exploited because the communities cannot afford to pay teachers and central government is unable to come up with the cash.

As to the last sentence, this is possibly the most important issue of all. As long as Karzai gains most of his income from international aid, his greatest concern will be keeping his foreign paymasters on-side. The welfare of his people is of secondary concern. Thus, if Afghanistan is to develop, there must be a transition from external dependence, building up a strong tax base so that the central government becomes dependent on its own population.

There is much to be said for the premise "no taxation without representation" but less is heard of the very obvious requirement that, for there to be representative government, there must be taxation. When people are taxed by government, they tend to take an interest in politics. Where there is no tax, there is no nation.

Such issues are, in fact, those which are the focus of policy-makers behind the scenes. They are grown-up issues upon which resolution will depend on whether the visible military adventure is successful. That is where the work lies, and where we must see progress, and it where our attention should be focused. Boring though it is, one crucial metric of success is how many Afghanis fill in a tax return.

That we see a strategy document addressing this is very much a start. That we are seeing recognised the vital role of agricultural development, and the road-building programme is also an improvement. We are further on than we were, and that is something.

That leaves the strategy document to make a statement of the "bleedin' obvious". The challenges facing Afghanistan and Pakistan are substantial and complex, it says. "They require a multi-stranded approach, covering security, building more effective and accountable governance, and promoting development in an often insecure environment."

Pace Nick Clegg and his observation that, "Public support for the conflict is under strain", what is also required is a better understanding by our own public of the issues involved, the priorities and the nature of progress.

On this we cannot expect any guidance from our kiddies korner media, or from our gifted MoD. But, for the grown-ups, the strategy document is directly accessible. The beauty of the internet is that we no longer have to rely on spoon-feeding from the media. We can read things for ourselves and make up our own minds. If we do not, we only have ourselves to blame.