No fuss about something 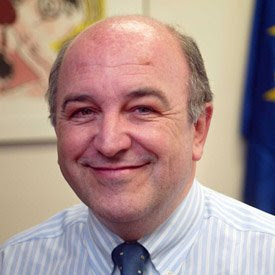 Recalling the huge fuss made over the threat that the EU might take over our seat on the UN Security Council, it is slightly perplexing that there is not a similar fuss over the proposal that the EU should take over on the IMF.

Apart from Reuters, the media seems entirely uninterested in the views of economic and monetary affairs commissioner Joaquin Almunia (pictured). Yet what this avuncular little man is suggesting is dynamite.

He tells us that the EU "must consolidate its representation in the International Monetary Fund to be able to pull its weight in shaping global economic policy". And his ambitions are not confined to this institution. They stretch to "global institutions" in general.

"Too often the EU's voice on key issues at the global level is fractured and we fail to influence policy debates as effectively as we might," Almunia says. So we must have "one voice".

"There are currently several European seats on the IMF board, and even the euro-area members have separate seats," he complains, adding that the case for a single euro-area chair was obvious.

It is equally "obvious" in the World Bank, in Nato, in the UN and all those other "global institutions", where gradually, insidiously – as happened with the WTO – the EU takes over control of our external affairs, leaving member states responsible only for implementing domestic policy, which is increasingly dictated by Brussels anyway.

And no one thinks this is important?