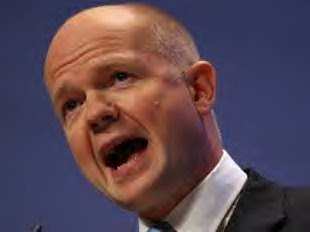 Speaking at the Tories' Spring Conference in Cheltenham, William Hague, the part-time Shadow Foreign Secretary and full time after-dinner speaker, has attacked the Labour Government for not giving the people a referendum on the Constitutional Lisbon Treaty.

Arguing that the Euro-elections will be "a campaign about trust", Mr Hague will say: "It is the saddest of all truths about this Government that faced with disillusionment with politics they have only added to it, faced with mistrust they have only justified it, and beset with cynicism they have opted only to exhibit it.

"They have not only devalued the currency of the nation, but their breaking of promises has been so brazen, and in the case of the referendum so inexcusable, that they have debased the coinage of politics itself. Their legacy will be to leave office with the word of government less believed than at any time in our lifetimes - another aspect of the scorched earth they will leave behind them, on which only a new government can plant the seeds of trust and belief afresh."

I must say if I were planning the Conservative campaign I would refrain from putting trust at the heart of it but politicians and their strategists seem to suffer from a semi-permanent state of amnesia.

One must admit there is a good rhythm to that speech. Hague is definitely the Tories' best speaker and one can quite see why he is in demand at various dinners and events.

However, blathering about that referendum is all well and good but only up to a point. The deed is done and the instruments have been lodged in Rome. The Tories are hoping that the Irish vote no again and the Czechs, the Poles and the Germans, therefore, do not ratify. The Treaty remains in limbo and nothing much will have to be done about it by the Conservative government until another IGC is called after another bout of dialogue, undoubtedly initiated by the Fragrant Commissar for Propaganda.

Yet, it is not impossible to imagine a different scenario with the Constitutional Lisbon Treaty done and dusted by next May when the the Labour Government, if things go as they do now, will most probably lose the election. We shall then have a Conservative government (at least in name) under a new constitution imposed on us by the Treaty for which the promised referendum had not been held. What will Cameron, Hague et al do then?