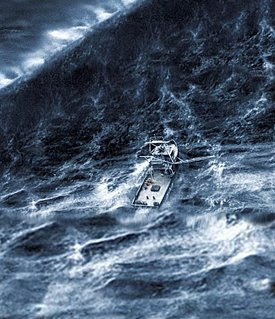 For years now, an Irish friend – not particularly political – has made a point in every conversation of complaining about the euro, driving up prices and making business difficult. With that, and the general management of the Irish economy, it was pretty obvious that the "Celtic Tiger" was due for a fall. The only question was "when".

It now looks like that "when" has happened – or is about to happen in a big way, with the government having announced an emergency austerity budget and now, according to The Guardian, Irish bank shares taking a nosedive "as fears grow over financial crisis".

This, or course, the financial crisis that the collective brains of the EU, the G20 and any number of alphabetical soup organisation are supposed to be sorting, the only problem being that every time they "sort" it, things seem to take a lurch for the worse.

As it stands in Eire, this former glittering economic star has the worst public finances in the euro zone, to the extent that the EU commission has become increasingly concerned that it, along with Spain and Greece, represents a threat to the euro's stability.

Cue Anatole Kaletsky in The Times who seems to be deputising for Ambrose Evans-Pritchard in the Armageddon states, telling us that the eurozone is bracing itself for the perfect storm. Further, he asks, if a financial emergency required immediate action, could Europe cope? That, he says, is the big question for the world economy

Setting out a dire tale of woe, which spans the usual culprits, from Ireland, though Greece and Spain, Kaletsky alos takes in Peer Steinbrück, the German Finance Minister, who, despite his swaggering boasts about the triumph of the Rhenish social-market model over Anglo-Saxon capitalism, presides over the weakest leading economy in the world outside Japan.

Europe, he wites - even more than America or Britain - is caught in the global financial storm and if the world suffers another blow in the months ahead, comparable to the collapse of Lehman Brothers, it is most likely to involve a crisis in the eurozone. Is it possible, he then asks, that Europe, whose biggest economies - Germany, France and Italy - never experienced an Anglo-Saxon style housing and credit boom, will suffer more damage than Britain or the US?

But herein lies the intriguing prospect. In a variation of the theme, the spirit is willing but the flesh is weak, Kaletsky poses the scenario where an emergency package had to be organised over a single weekend in response to a European crisis. Is it obvious, he asks, that the EU and Germany would cope any better than the US Government did in the Lehman collapse last September?

That is a question nobody seems to be asking - which probably makes it the biggest risk facing the global economy today, concludes our man. And that is indeed an intriguing thought. By the time the great European supertanker has started to turn, the waves could have swamped it.