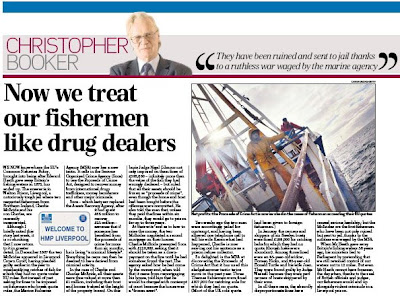 While our gaze is on distant lands, and we concern ourselves about peace, stability and the welfare of the population in Afghanistan, we have troubles here at home.

As Booker explains today, we are starting to see the end game that, before too long, is going to need the Army back here – to keep public order.

We now know, writes Booker, where the EU's Common Fisheries Policy, brought into being after Edward Heath gave away Britain's fishing waters in 1973, has ended up. The answer is in Walton Prison, Liverpool, a notoriously tough jail where two respected fishermen from Northern Ireland, Charlie McBride and his son Charles, are currently incarcerated.

Booker suggests that the story is "shocking", but it is much, much more than that. It is a travesty, an appalling example of how our ruling elites have become so oppressive and so all-powerful that they are no longer part of us, or represent us – but are indeed our oppressors.

The story (or at least, this part of it) starts in December 2007 when the two McBrides appeared in Liverpool Crown Court, having pleaded guilty earlier in the year to misidentifying catches of fish for which they had no quota under EU rules.

But instead of just asking for fines to be imposed on fishermen who break quota rules, the Marine Fisheries Agency (MFA) now has a new tactic. It calls in the Serious Organised Crime Agency (Soca) to use the Proceeds of Crime Act, designed to recover money from international drugs traffickers, money launderers and other major criminals.

Soca – which last year replaced the Assets Recovery Agency, after it had spent £65 million to recover £23 million – assumes that if someone has benefited from the proceeds of crime for more than six months, he is living "a criminal lifestyle". Everything he owns can then be deemed to have derived from criminal activity.

In the case of Charlie and Charles McBride, all their assets were thus valued at more than £1 million, including their boat and homes (valued at the height of the property boom).

On this basis Judge Nigel Gilmour not only imposed on them fines of £385,000 – infinitely more than the value of the fish they had wrongly declared – but ruled that all their assets should be frozen as "proceeds of crime", even though the home and boat had been bought before the offences were committed. He also told the men that, unless they paid the fines within six months, they would go to prison for up to three years.

At their wits' end as to how to raise the money, the two McBrides negotiated a second mortgage on their homes. Charlie McBride presented Soca with £120,000, asking that it should be taken as a down-payment on the fine until he had somehow found the rest.

The agency asked how he had come by the money and, when told that it came from remortgaging his house, told him that he would be charged with contempt of court because the house was a "frozen asset".

Two weeks ago the two men were accordingly jailed for contempt, and having been allowed one telephone call to tell his wife Karen what had happened, Charlie is now serving out his sentence as a prison refuse collector.

So delighted is the MFA at discovering the Proceeds of Crime Act that it has used this sledgehammer tactic twice more in the past year. Three Thames fishermen were fined £317,000 for catching sole for which they had no quota. (Most of the UK sole quota had been given to foreign fishermen.)

In January the owners and skippers of six Newlyn boats were fined £188,000 for catching hake for which they had no quota (though hake were abundant). Among those fined were an 83-year-old widow, Doreen Hicks, and 82-year-old Donald Turtle and his wife Joan. They were found guilty by Judge Wassell because they were part owners of boats skippered by their sons.

In all these cases, the absurdly disproportionate fines have caused serious hardship; but the McBrides are the first fishermen who have been not only ruined but sent to jail, thanks to the ruthless war waged by the MFA. Concludes Booker:

When Mr Heath gave away Britain's fishing waters 36 years ago, his ministers lied to Parliament by pretending that we still retained control of our waters out to 12 miles. But even Mr Heath cannot have foreseen the day when, thanks to the zeal of British officials and judges, our fishermen would end up alongside violent criminals in a Liverpool prison.

That is Booker's conclusion. Others will (and have) drawn different conclusions. One of those is that, when the tumbrels do finally roll, a first class seat will have to be reserved for Judge Nigel Gilmour, who should be amongst the first to visit la Madame.

There does become a point in the history of any nation where those who govern no longer have the consent of those who are governed. That point passed some time ago, but it is the treatment of the likes of the McBrides which brings it home to us how far down that road we have travelled.

At the end of that road is civil disorder, anarchy and then war, as the people rise up and slaughter their oppressors. It may not happen in my lifetime. But, if it does I rather suspect that, if I am not actually part of the throng, I will be standing in the streets applauding as we rid ourselves of the incubus that has become our government and our ruling élite.