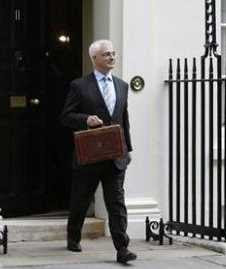 With over 3,000 budget-related pieces on Google News and doubtless more to come, it is hard to see how anything by way of useful comment can be added to the torrent. If you started reading now, you might just have caught up by the next budget.

The key points, we are told, are a £7bn squeeze on the rich followed by a brutal freeze on public spending in the next parliament, setting up the government for the general election.

But, while Darling offered a financial budget, he also delivered what is hailed as the world's first "carbon budget", committing the UK to a revised target of reducing greenhouse gas emissions to 34 percent of 1990 levels by 2020.

This, of course, is hubris personified as the man won't be around a chancellor after the election in 2010, and there will have been a least two more elections by the time a further ten years have elapsed.

By then, also, the likelihood is that the already apparent cooling trend will be well established and the "climate change" scam will be history, buried in winter snows and power and food shortages.

Darling's projections for his carbon budget, therefore, are likely to be about as accurate as his general financial forecasts, but that has not stopped him announcing a £1.4bn package of measures to help create low-carbon economy.

What he is actually doing is creating a low-money economy so it is some small consolation that climate change campaigners are complaining that the package is "inadequate", but then that would be their refrain even if we committed 100 percent of GDP to their obsession.

Adrian Wilkes, chief executive of the Environmental Industries Commission, thinks the package is "timid and inadequate" while Friends of the Earth's director Andy Atkins whines that, "The government has squandered a historic opportunity to kick-start a green industrial revolution and slash UK carbon dioxide emissions."

As to the bones of this fantasy, he has allocated £375m for home energy efficiency, and £525m "support" for offshore wind power. On top of that, Darling is spending £405m of our money to develop low-carbon technologies.

The actual amount to come out of the tax fund is about £510m over the next two years - 9.6 percent of the chancellor's total spending commitments. Much of the rest comes from a temporary increase in the Renewables Obligation Certificates, which we will have to find out of increased electricity bills.

There is also to be available £4bn in new loans from the European Investment Bank, aimed at helping "green" schemes overcome a critical lack of commercial money, with banks reluctant to commit money to these increasingly mad schemes.

The worst is not over though. Today we are to expect an announcement on carbon capture and storage (CCS) plants. These are probably to be funded by money from the EU and an unspecified "new mechanism", likely to end up as a levy on consumer bills. Soon, when you can get it at all, electricity will become a luxury reserved for Sundays and bank holidays.

Unfortunately, according to North Jnr who watched the parliamentary debate after the budget, there is no immediate (or any) relief to hand.

And despite there being an opportunity to ditch at least 9.6 percent of the public spending commitment, without anyone noticing, no such suggestion was forthcoming. We carry on regardless, as madness continues to afflict our benighted land.