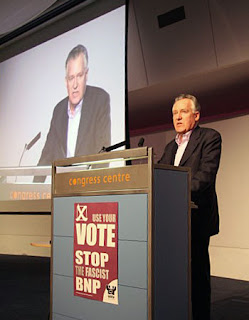 The story of this year's euro-elections could very well be the rise and rise of the BNP. But what also makes the elections fascinating is the behaviour of the media.

On the one hand, we see the "right wing" press, with the possible exception of the Mail on Sunday largely ignoring the BNP issue. Most recent to do so was The Times, which managed to discuss the elections without making any reference whatsoever to the BNP.

On the other, we see the left wingers making a meal of the "threat", with even Al Jazeera pitching in.

Latest into the fray is Peter Hain in The Guardian with an impassioned piece headed "We need to wake up and tackle BNP poison head on".

This racist party, he writes, stands on the brink of electoral breakthrough, then demanding that, "We must fight them as we did the National Front in the 70s". His concern is that, should the BNP win MEP seats, it would secure an unprecedented platform and entitle the BNP to draw hundreds of thousands of euros from Brussels indirectly to buttress its full-time personnel and organisation.

But this exposes another oddity of the euro-elections. Ostensibly, these election are about sending representatives to Brussels to represent us in "Europe" but, as could the Conservatives not offer us a positive reason for voting, neither it seems can Hain.

Instead, the great europhile tells us that, to confront the BNP's threat, the priority must be grassroots campaigning. "Labour must win back trust by fielding candidates rooted in their communities and pledged to deliver on local issues."

That, when you think about it, is bizarre. Hain is actually suggesting that the euro-elections should be fought on local issues – i.e., not about any of the issues that might be raised in the EU parliament. In so doing he is in effect demonstrating the essential irrelevance of MEPs, unable as he is to offer a case as to why a Labour MEP would be unequivocally better than an BNP representative.

Thus, we have the Tories telling us to vote for them, to send Gordon Brown a message, and Labour telling us to vote for them (or any of the main parties) to keep the BNP out. Of the Westminster "big three", we have yet to hear from the Lib-Dims but, from past experience, they too are likely to go for local issues, also leaving the EU out in the cold.

This makes for a crazy election, with the main protagonists demanding votes for every and any reason other than actually appointing MEPs to do whatever job it is they are supposed to do. That, in itself, should tell you something about the EU parliament, but I suspect it is not the message the "colleagues" want to convey.