The fog of government 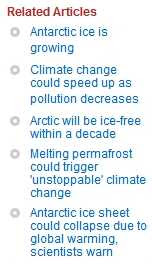 Just a quick scan of the "related articles" (left) tells its own story. On the one hand, we are breathlessly told on 18 April that the Antarctic ice sheet could collapse due to global warming. Then, four days later, we get Antarctic ice is growing.

Forget reading the stories – read instead this analysis which charts some of the convoluted arguments ("squirming" would be a better description) as the warmists try to reconcile reality with the precepts of their religion.

All this would be hilarious sport were it not for the fact that this institutionalised stupidity is embedded firmly in government policy to the extent that, yesterday a chancellor confronting the worst financial crisis in living memory – where the policy response screams for cutting public expenditure – decides to commit additional public expenditure to the moonshine that is global warming.

It would be comforting to think that this fundamental stupidity was confined merely to embracing the dogma of "climate change" but it is not. The only constant in government, it seems, is its endless capacity to make stupid decisions and then, having made them, to repeat them again and again.

The interesting thing (from an analytical point of view) is that the same dynamic pervades at all levels of government, across the board, irrespective of the subject matter.

Thus, the crass stupidity of pumping money into massively expensive and highly inefficient offshore wind farms is in exactly the same league as buying inadequately protected military vehicles and then bolting on increasing amounts of armour in the vain hope of somehow making them better.

In each case, the context may be different but what binds them together is the common factor – that degree of crass stupidity which to an outsider is so patently obvious that one is left staggered that sentient human beings could actually be engaged in such fatuous behaviour.

So consistent is this dynamic that one is thus left to speculate that there must be a grand law of the universe that dictates that governments must behave in such a manner. In anything, the pattern is such that behaviour can only be characterised at two levels – NLOI and RBS.

It would seem that the default value is very much NLOI - "normal level of incompetence". But the second law of the universe would seem to dictate that, as time progresses, governments naturally gravitate to the higher RBS level - "rank bloody stupidity". And, with yesterday's budget, we have arrived there with a vengeance.

This would also seem to explain the dynamics of political change. As a government rises to the upper tiers of RBS, an opposition party afflicted merely by NLOI begins to look distinctly attractive and then increasingly electable. Thus does it assume office until, with the passage of time, it too develops an incurable case of RBS and has to be replaced.

The development of these states could be regarded as all part of the "fog of government", although we are perhaps seeing some changes in the cycle, but only to the extent that the interval between NLOI and RBS seems to be shortening. Arguably, RBS is now becoming the default value and we are having to look to graduations in this state in order to discriminate between the different contenders for office.

There are, however – rather unfortunately – two other driving laws of the universe. The first is that stupid people and institutions can never recognise their own stupidity. Secondly, both intensely resent being called stupid, and deny such a charge emphatically. This means that there can be no corrective mechanism within the ranks of government.

All that brings us to the final immutable law of the universe. Eventually, we have to rise up and shoot them all, in order to restore the NLOI to its rightful place. Unfortunately, that happy state still seems to be somewhat distant which means that, for the time being, the stupid will inherit the earth … or, at least, the government.