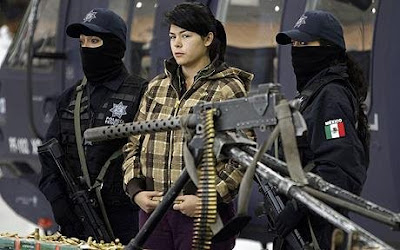 Thirty seconds' visual inspection of the above picture tells you that the headline in The Daily Telegraph yesterday, based on a Reuters report, is a crock. "Mexican drugs war: woman arrested with anti-aircraft machine gun," it tells us, a claim so obviously and transparently wrong as to be laughable.

Even worse is the claim retailed in the text, where the weapon is described as a .50-calibre, anti-aircraft machine gun, which can fire 800 rounds per minute which is capable of penetrating armour from more than 5,000 ft.

Although of some antiquity, this particular model may be somewhat younger than 1919 as it appears to have metal ammunition belt links rather than the original canvas belts – which could make it of late (WWII) war vintage. However, the give away is that the gun is mounted on the standard M2 tripod, making it an infantry weapon with no anti-aircraft capability whatsoever.

There might have been a time once when either the journalists, their subs or their editors realised the absurdity of the claims made for this weapon, and thus the absurdity of their own headline. Gone are those days, however. If the agencies produce it, they print it.

A tiny, nerdy point it might be. But the more substantive point is that if there is not that reservoir of knowledge which enables the media to filter out such obvious absurdities, how can it be relied upon to inform us of more complex issues, which rely on an understanding of basic technical matters.

But this profound ignorance is having more serious effects. Progressively, we see the media opting out of any serious comment (or reporting) on defence issues, concentrating instead on "feel good" stories such as this in The Daily Telegraph today, which "reveals" how a chef on a Royal Navy hunter-killer nuclear submarine "keeps a crew of 130 going on missions lasting up to nine months."

What is not generally realised is that the MoD is actively encouraging this trend. Journalists who want to delve into hard-edged stories about failing equipment, procurement decisions or excess costs, will quickly find all sorts of institutional barriers up against them, right up to and including the "D-advisory" system.

On the other hand, if the media sticks to approved "feel good" stories, they will find the full resources of the MoD at their disposal, as we see from the submarine story, where the paper preens: "The Daily Telegraph was granted exclusive and rare access to HMS Tireless, one of seven Trafalgar Class submarines in the Royal Navy fleet, to watch Petty Officer Andy Bailey at work in his kitchen beneath the ocean waves."

The fact that this sort of low-grade fluff is largely displacing serious defence reporting – as indeed it is doing – ought to be of some concern, not least because this is just one area in which we see a dumbing down of media coverage. They are treating us like children, because they are children themselves. It is about time the grown-ups reclaimed the territory.