A litany of contradictions

Idle, salacious and downright scurrilous Westminster gossip about Tory leaders and others has been circulating so long that the "smear-mails" are easily detected by the spam filter and dumped, saving the trouble of checking them and deleting them manually.

Thus when Matthew d'Ancona writes in The Sunday Telegraph of the current spate of media excitability, he is absolutely spot-on in his observation. "[People] know all this and more," he writes. "And – guess what? – they don't seem to care."

Indeed, they do not, which rather puts the whole McBride affair into perspective. It is the ultimate "Westminster bubble" story, of huge interest to the political classes and of very little interest to anyone else.

By this measure, the headline covering d'Ancona's extrusions is only half right. It proclaims that: "The Damian McBride scandal shows just how out of touch Labour is". That may be the case, but the torrent of media coverage actually shows how out of touch is the entire political class.

But, with the British political blogosphere at the centre of the soap opera, this brings Daniel Hannan, journalist, blogger and part-time MEP into the fray.

He would have us believe that the "Draper-McBride affair" is the latest demonstration of one of his long-standing contentions, viz that free-marketeers take more naturally to the possibilities of the internet than Lefties. Lefties, opines Hannan, tend to believe in control (or, as they prefer to put it, "collective action"). They don't understand that the web is the enemy of regulation. Instead, they struggle to press the internet into their existing systems, treating it as just one more way to get their message across.

Thus, according to the great sage, the whole episode shows how blogs have pulverised the old media and political monopolies.

It takes one of Hannan's own commenters to put an alternative view, arguing that, "… those in the blogging industry pride themselves a bit too much on 'being in the know' as it were. It's a closed incestuous community of bloggers which feed off each other. They rate themselves too highly. The ordinary voter, readers of the Mirror and Sun aren't in the least bit bothered at the antics that bloggers get up to."

Certainly, the "right wing" blogosphere is incestuous. Some might regard it as a self-referential claque of political groupies and wannabes, all churning over the same material, linking to each other, telling themselves how wonderful they are and giving each other awards and accolades. 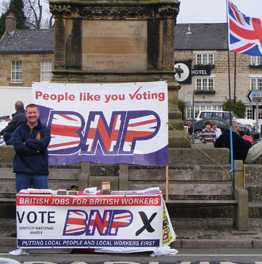 While we might not go as far that that, there is certainly a case to be made that, while the "claque" preens itself over its potency and influence, the ground is being cut from under it, without it even noticing.

Guido Fawkes may thus be the darling of the claque but while he rejoices in an Alexa traffic rank of 72,546, the BNP website currently ranks at 47,268 – so much for Hannan's view of the free marketeers taking more naturally to the possibilities of the internet than Lefties.

However, while the BNP is host to the most popular British political site on the web, there are other players in the field as well. So, while Conservative Home boasts a ranking of 145,084, as of yesterday, the Hizb ut-Tahir site ranked 89,748.

Make of that what you will, but the fact is that the "right" certainly does not own the internet. There is life outside the self-referential Westminster bubble and, while the political claque babbles, there are things stirring in the real world. Out and about in North Yorkshire, you can bet that the fate of Mr McBride is not on everyone's lips.

Meanwhile, in a long piece in The Sunday Telegraph, Mary Riddell writes a long review of the film "State of Play” (print edition), lamenting the demise of the newspaper industry. With its demise, she says, "Democracy itself is under threat".

Looking at the front-page headlines this morning, the contrast between the picture painted by "State of Play" and the reality is all too evident. We have a litany of contradictions, where the abject triviality and venality of the Westminster bubble is marginalising itself, drowned in the torrent of its own self-regard.

When it finally wakes up, the world it believes it inhabits may no longer exist - not that it ever did.