How about some equality? 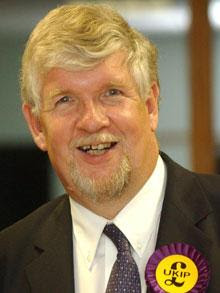 "Fair cop!" as they might say, with the news that Tom Wise MEP has finally been charged with the criminal offences of false accounting and money laundering. His erstwhile researcher, Lindsay Jenkins, also faces the same charges.

According to The Daily Telegraph, the pair will appear at City of Westminster Magistrates' Court on 27 April for a fraud where they allegedly siphoned off nearly £40,000 of taxpayers' money.

There is little sympathy on this blog for a man who has not served the eurosceptic movement well, having been elected on a UKIP ticket in 2004 after a prolonged stint as Jeffrey Titford's assistant. Nor is there any sympathy for Lindsay Jenkins.

However, in the interests of fairness, it is apposite to point out that the amount of money appropriated by Wise and his alleged conspirator is small beer compared with the wholesale looting of the public purse by Den Dover.

This is the Tory MEP who paid his own company £500,000 or so from his expenses account and has since been ejected from the Tory MEP group, with demands that he repays the money. So far, he has refused to pay a penny and stands to reap further benefits from a handsome pension when he steps down as an MEP in June.

There was talk of an OLAF fraud investigation, but nothing seems to have come of that. Where, however, there is clearly some evidence – to say the very least – of impropriety, justice demands that there should be equality of treatment. Dover should be subject to the same level of investigation that Wise has been put through.

In the absence of such equality, the suspicion might otherwise remain that Wise is being prosecuted not for his alleged offences, per se, but because at the time he is said to have committed them, he was a UKIP MEP. Yet, despite rumours to the contrary, we understand that this is not actually a crime - for the time being.