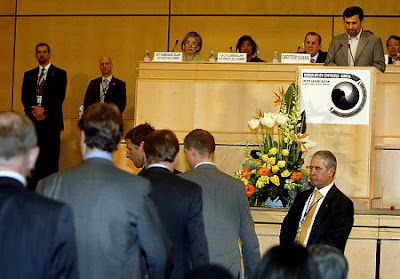 I think I ought to clarify a couple of points in my previous posting on Britain, Durban II and other countries.

In the first place, we ought to give credit where it is due. Canada did not simply join other countries in boycotting this farcical hate-fest - she led the way, as we wrote back in January 2008. Apologies to all our Canadian readers who felt their country was under-appreciated.

Secondly, it was unwise of me to rely completely on Charles Johnson's postings, especially about Sweden. Being in a hurry is no excuse for not following up a story. However, one of our readers explained the situation and, gratefully, I am posting his comment directly:

Charles Johnson is wrong, as he so often is when it concerns Sweden. This time, though, one may forgive him. The press release and the statement by our Integration Minister Nyanko Sabuni (liberal) was somewhat misleading. Maybe one could forgive her too.

Apparently there has been a rift within our government wrt to the question of participation in the Durban II meeting. (Not that we would know that from our newspapers or from the bloggers either. However, reading between the lines of her statement and the statements put out by our Dept of Foreign Affairs, it is quite evident that feathers have been ruffled.)

It is true that no Swedish minister will be present, but just as Britain is sending a delegation of top diplomats so is Sweden. Obviously our "tranzient" FM Carl Bildt was keen for Sweden to take part. However, the Liberal party was against it, and since Mr Bildt couldn't attend himself (three party meetings in Prague (the French, Czechs and the Swedes) and then onto Cyprus ... one wonders about those carbon footprints!) in the end he must have agreed on a compromise. Or as he writes on his blog today: "It will be necessary to carefully follow what happens at the follow-up meeting to the Durban conference ... and to keep close contact with the other EU countries regarding how to act. It will be difficult to calibrate our presence."

Anyway, Bildt has probably lost. President Ahmedinjahd just did what every sane person knew he would do, and most western diplomats including the Swedish delegation left the conference hall.

I shall write later on about the fun and games in Geneva. Because I was in the BBC Russian Service studio I actually saw the footage of the delegates walking out. Very entertaining it was, too.