From the House of Lords 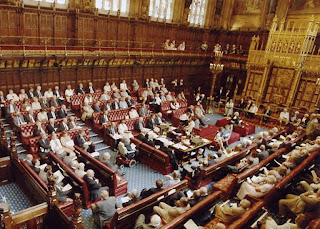 There were two EU related Starred Questions in the House of Lords on Tuesday and they elicited interesting responses. The first was asked by Lord Campbell of Alloway:

To ask Her Majesty’s Government whether, as the United Kingdom’s net contribution to the European Community budget is projected to rise from £2 billion in 2008-09 to £6.5 billion in 2010-11, they will withhold a proportion pending a statement of assurance on the accounts by the Court of Auditors.

Not an unreasonable sentiment, one would say. After all, how else can we exercise that famed influence, which we shall lose if we leave the wretched organization, if not by withholding money until the accounts start being even half-way acceptable.

One would be wrong. It seems that we are duty bound to keep sending huge amounts of money to the EU while they are not duty bound to try to make the best use of it and keep accounts that would be passed by the Court of Auditors.

My Lords, the answer is no. The United Kingdom is required to make its contributions under obligations imposed by the treaties. The European Communities Act, and Section 2 in particular, gives effect within the UK to Community law. Inability to gain clearance on the majority of EU expenditure is unacceptable, and the Government will continue to engage with European institutions over these issues and to look for member states taking greater responsibility for the EU funds that they manage.

Unacceptable or otherwise, there is nothing we can or should do about it. How nice. Even nicer is the fact that the situation is improving all the time as Lord Davies of Oldham, speaking for HMG explained in a kindly fashion:

However, as recently as 2003 only 6 percent of the accounts were given a positive opinion by the auditors and last year it was up to 40 percent, so there is improvement.

What are we worrying about? Next time a private company has problems with the dreaded audit it can simply point out that in a few years a considerably higher proportion of the budget (though less than half) has been given a positive opinion. I wonder how that will go down.

Lord Tomlinson suggested that this was a question of statistical errors and Lord Newby intimated that this is not time to go in for saber-rattling. As far as the Lib-Dims are concerned no time is a good time unless we are rattling that saber against the United States or, failing that, Israel. The EU? Pshaw.

Lord Pearson of Rannoch raised the problem of the "former chief accountant, Marta Andreasen, who was sacked simply because she refused to sign off its fraudulent accounts and who has since been treated disgracefully".

This was dismissed as unworthy of consideration.

My Lords, I think that that is a matter of opinion. The noble Lord has articulated that position for several years. The response of the European Community and the British Government to that position is that his views are, at the very least, somewhat contestable.

Except that it is never contested. At best Lord Pearson and his colleagues are swatted aside; at worst they are abused in a very unpleasant fashion.

The other Starred Question was asked by Lord Dykes of whom we have written before. To say he is a europhiliac is to credit him with an ability to think that he shows no obvious sign of.

To ask Her Majesty's Government what assessment they have made of the effect of the resignation of the Government of the Czech Republic on decision-making in the European Union under the Czech Presidency.

The answer is that there can be no effect whatsoever as the acting government that resembles the one that had resigned to a surprising degree will carry on and, in any case, the country has a president. Indeed, that is what his lordship was told by Lord Davies of Oldham who had clearly drawn the short straw that day.

My Lords, the Government of the Czech Republic continue as a "Government in Resignation", and Ministers and officials will continue to carry out their duties in full as EU presidency.

Indeed, Lord Dykes's follow-up question in which he agree with the assessment makes one wonder why he bothered to ask something as stupid as that. One can only assume that he wanted to have a little dig at President Klaus, a man in every way more eminent than Lord Dykes himself.

My Lords, allowing for the occasional vagaries of President Klaus, does the Minister agree with the comment on page 11 of today's Financial Times that this is a problem more in Prague than in Brussels because of the inherent continuity in the troika system and the maintenance of the agendas running continuously over the presidency period?

He was, I am glad to say, reprimanded by Lord Lawson:

My Lords, will the noble Lord not reflect on his commendation of what his noble friend said a moment ago in his attack on President Klaus? He is the president of a friendly country, a fellow member of the European Union and a man of very considerable distinction who remains unaffected by the resignation of the Czech Government.

Lord Dykes sounds more and more like a sniggering schoolboy of about 13 who thinks funny little comments about adults behind one’s hand are super-intelligent. Most of us grow out of that. Others go into politics and fail in that, too.

Meanwhile the European Union Committee in the House of Lords produced its Seventh Report, which is not of earth-shaking importance but raises an interesting conundrum.

It deals with the problems caused by the fact that Protocol No. 4 in the existing Treaty establishing a European Community gives the UK a supposedly flexible position with regards to EC measures on visas, asylum and immigration. The opt-in was considered to be an example of masterful British negotiation.

Unfortunately, matters never rest in one place. As the Committee points out:

The result as the not very long report shows is something of a mess with nobody knowing quite what does and what does not apply to the UK. Undoubtedly, the solution proposed will be for full participation in all the Title IV measures. There is, however, another solution and it is hereby respectfully suggested.

How about legislating for ourselves with regard to international agreements we sign as fully sovereign states? Could that dispense with this appalling mess of never knowing what is and what is not British law and how it came to be in existence? Because, if the UK fully participates in Title IV measures there will be a great deal of legislation to do with issues that, we are told by politicians, matter to people much more than "Europe" and none of that legislation would have gone through Parliament in any discernible fashion.