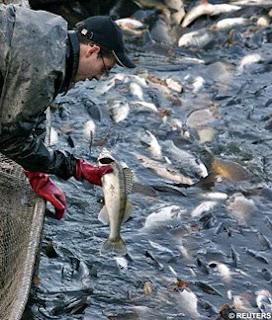 We've got it all wrong on fishing strategy, says EU – at least that is the "take" of The Times. It tells us that the EU commission is admitting that Europe's fishing industry is on the brink of suicide and several species are in danger of extinction after 25 years of policy failure.

Officials, we are then told, have admitted five key failings in the EU's Common Fisheries Policy as they prepared to tear up the idea of a centrally dictated strategy. They have launched the search for an alternative, saying that much of the responsibility for fishing must be returned to EU member states.

This would seem to contradict one of my immutable laws of government - that stupid institutions can never admit their own stupidity. However, not is all quite as it seems – there is more than a little spinning going on.

The EU Green Paper is far from as contrite as The Times would suggest. It starts off by claiming:

The EU Common Fisheries Policy has become streamlined and is now considerably cheaper and simpler to manage. Decision-making allows for specific technical decisions to be taken with closer involvement of fishers. Fishing operators are given incentives to behave responsibly but they are also expected to demonstrate that they comply with the basic principles of the CFP. Stakeholders fully participate in decisions and debates on policy implementation. Fisheries control has become far more effective.

The paper then goes on to offer a series of options, ostensibly for the better management of the Common Fisheries Policy, thereby ignoring the central and irredeemable defect of the policy – the very fact that it is a common policy. Furthermore, these are but proposals and there is a long way to go before any of them see the light of day – if at all.

Nevertheless, it is at least something that, after 25 years, the EU is recognising that one of its longest established policies has failed. It has yet to understand, however, the reason for that failure.