Another country to watch 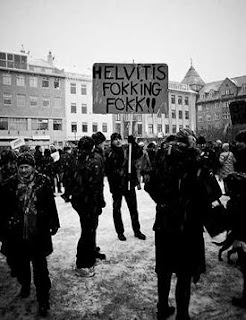 Iceland goes to the polls tomorrow and, according to this Reuters piece, the caretaker government is likely to be brought back. It is made up of the Social Democrats and the Left-Green Movement.

It so happens that we do have some information about the situation in Iceland beyond what appears in the British media. According to our informant EU membership, discussed in the first few days after the financial collapse, is now a dead duck. After the collapse polls showed anything up to 2/3 in favour of the country joining the EU. Now the majority is against and the new (or old but now elected rather than caretaker) government will not be under any pressure to apply.

It seems that there was a proposal to change the Icelandic constitution in order to make it easier for the country to apply for EU membership. This has been defeated by the opposition Independence Party. The Left-Green Movement is against EU membership but supported the constitution change, arguing that it would be more democratic. Well, they always argue that without bothering to provide a definition.

The saga (pun intended) of Iceland and the EU is carefully monitored by Hjörtur J. Guðmundsson on his blog, EU News from Iceland. Worth watching. We shall be reporting.