And the news is? 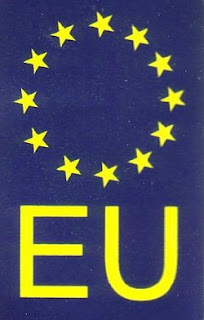 "EU trains a new diplomatic corps - without waiting for Lisbon Treaty" storms the Telegraph, with Bruno Waterfield doing his bit to keep us informed.

This is the EU's putative External Action Service (EEAS), with five hundred and thirty staff from the EU commission having already begun training to build a "shared diplomatic culture and an esprit de corps", ready to take over once the treaty has been bludgeoned into place.

Then we get Declan Ganley telling us that: "It is cause for serious concern that, by implementing the Lisbon Treaty, EU institutions are manifesting outright contempt for democracy." He is right to be concerned. As we wrote:

The EU is also forging ahead with a European diplomatic service, officially called an External Action Service, with EU embassies and ambassadors in every country to project EU foreign policy and issue EU visas. The service, which some governments hope will replace national diplomatic services, will answer to the European foreign minister, a post created by the constitution, but to which Javier Solana, the EU's current head of foreign policy, has already been appointed.

Officials have been told by member governments to start laying the groundwork for the European diplomatic service. One official said the work was continuing: "We are in limbo, but we are carrying on. What else can you do right now?" A British government spokesman said, however: "The external action service does not exist. The only thing happening is preparatory work, and it will not come into being without a treaty."

The only thing is that we wrote this on 8 June 2005, based on a story in The Times. In December 2005, there was further evidence that the EU was implementing the constitutional treaty and, as we know from COM(2006)712 final, it has been actively plotting to take over embassy functions for some considerable time.

This is simply the tip of the iceberg, just another step in the slow process of integration. There is no point in complaining about it – this is what the EU does. The EU, by its very nature, by the very fact that it exists, makes it contemptuous of democracy. It is there to destroy democracy. The only option is to get out.

What is different, of course, is that we are coming up to the euro-elections. So we not only have Ganley pitching in, the Conservatives are also staking a claim.

We thus have Mark Francois, the Conservative spokesman on the EU, declaring: "This project shows just how much more power Brussels would gain over our foreign policy. It is outrageous that the British people are being denied any say over it. That's why the Conservatives will be campaigning for a referendum in the European elections."

And when the election is over, the parties will go back to sleep and we will hear no more until it is convenient to raise it again … when plans will be even further advanced. Nothing else will have changed.