And the big news is? 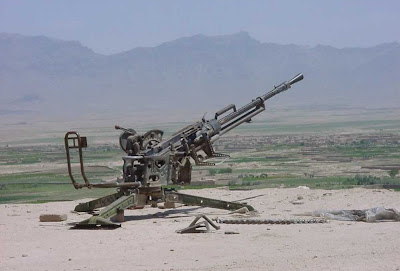 The surreal disengagement of the MoD and our media continues with the latest round of non-reporting on Afghanistan. The event of the moment – from US sources – is a disturbing development, where the Taleban has fielded two heavy anti-aircraft weapons capable of taking out a Chinook or other British helicopter.

Both were Soviet-made ZPU-1s (pictured), loaded and ready for use, mounted on the back of pick-up trucks. They were located in the Nad Ali district, close to Lashkar Gah, where British troops are stationed.

Fortunately – in an encouraging testament to the ground work done by coalition forces - the villagers spotted the first gun and reported it to the authorities. Shortly thereafter, it was given the undivided attention of a brace of US Air Force A-10 Thunderbolt IIs. According to the dry, descriptive prose of the official bulletin, the aircraft "engaged" the enemy truck, using their 30mm Avenger cannons "to destroy the truck and the machine gun."

Less than 12 hours later, villagers reported that the Taleban in Nad Ali had obtained another ZPU-1, which they had been firing in the vicinity of the local bazaar. Coalition forces used a precision strike successfully to destroy this gun as well.

Although the ZPU-1 is 70s-era equipment and obsolete, with a 14.5mm calibre, it is a potent anti-aircraft weapon and could have made short work of any helicopter it hit. The rapid intervention of the US Air Force, said a coalition forces spokesman, "without a doubt saved the lives of Afghan and coalition forces".

Nor were these the only interventions. Yesterday saw a continuation of the high level of air activity with 76 missions flown, including in Lashkar Gah itself where a US Navy F/A-18C Hornet flew a show of force and expended flares to deter enemy suicide bombers after a source had warned coalition forces of enemy preparations.

However, such tedious, low-grade stuff cannot even begin to compare with the MoD's "take" on the top news story. From this source, we learn that a British soldier deployed to Afghanistan has become the talk of his local town after he started sending regular letters back to his local pub describing daily life on the "front line".

This, incidentally, is Colour Sergeant Michael Saunders, Platoon Quartermaster Sergeant for the Combat Infantry Signals Platoon, who spends most of his time in a signals cabin in Camp Tombstone. With the story happily retailed by the BBC, it really is good to know that the powers that be have such a good grasp of what is really important and are keeping us so well-informed.