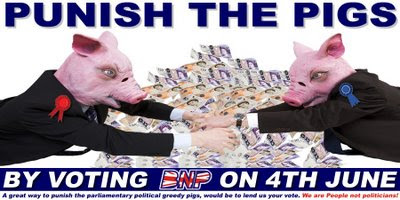 You could pick any number of issues. Take, for instance, the latest terrorist threat, the effects of unrestrained immigration from the EU, or perhaps the insanity of votes for prisoners, driven by the European court of human rights.

You could get worked up about the coming energy crisis, a waste policy that is not only barking mad but ruinously expensive, the terrifying winter energy bills or Brown's Green budget which is beyond parody in its cretinous vacuity.

You could easily get incensed about police thuggery, police stupidity, MPs' expenses or their idleness and/or greedy bankers.

In fact, the list of issues about which we could get really angry is virtually endless, but you would have to go a long, long way to find anyone who thought that the politicians – of any party – had a grip or were doing anything other than making things worse, while lining their pockets.

A little while ago, I wrote about the electorate being in a "funny" mood. Randall has written about anger and I countered with "festering resentment" as a better description of the public mood.

Whatever it is, with a range of slogans and images, the BNP is capturing it. The political claque is going to have a very hard job countering its messages, and the more it remains in denial, the harder it is going to get for them.