Nice to get it out of the way 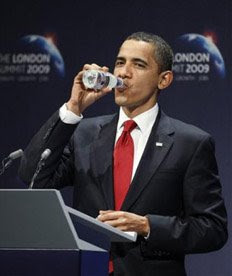 That "historic" G20 Summit, which consisted of leaders of twenty countries, most of whom had managed to make a total mess of the economy back home is over. They are all going home and we are picking up the tab.

Questions will be going down about how much the whole shebang cost us and I think we ought to have itemized answers.

The anarchist demos were, as always, smaller and less important than advertised. I can't help feeling that Socialist Worker has fallen down on the job. Yesterday there were three not very large groups in various parts of the City and Westminster and the police easily kept them apart.

The only bit of violence yesterday was when the mob broke into the RBS building next to the Bank of England, because it was the one that was empty. RBS had told all its staff to stay away so there was nobody to keep the bozos out. You do wonder who runs that insitution.

In other buildings City workers sat in the window, many especially dressed in pin-stripe suits and watched the mob as they shouted childish taunts, inviting them to "Jump". They responded in an equally childish but far more amusing way by waving £10 notes at them. I hope somebody had the foresight to get twenties and even fifties. We know who won that exchange.

All in all there was some violence, some people were hurt and quite a few have been arrested and being arrested. They will have little sympathy from those who had their journey to work disrupted or found themselves under virtual house arrest because they happened to be living near ExCeL.

So that's the anarchists out of the way. The far more frightening G20 Circus can actually make our lives very difficult but it seems that the agreement of what they will do is very superficial. We shall find out in the days, weeks, months and, even, years to come what sort of damage they have managed to inflict on all our economies.

The London newspapers (most of them freebies) have succumbed to Obamamania, which is very different from the way his visit has been covered by some on the other side of the Pond. The iPod with his own speeches and songs from Broadway shows that he seems to have given the Queen has embarrassed people. (Glenn Reynolds, quoting a Telegraph blog, Sister Toldjah, quoting Jonah Goldberg, and Michelle M, of course, quoting other blogs and Allahpundit on Hot Air).

The Washington Times had a delightful description of a serious miscalculation by the Obama team about the time difference and other matters. There is some dissatisfaction of President Obama bowing to the Saudi King. Americans, especially American Presidents are not supposed to bow to foreign monarchs. Has he not heard about 1776 and its spirit, not to mention the Constitution?

Altogether, I'd say those freebie papers and the Standard have jumped on the bandwagon too late. (Incidentally, the new editor of the Evening Standard, one Geordie Greig, under the new proprietor, ex-KGB agent now oligarch Alexander Lebedev, has achieved the impossible - the newspaper is now worse than it was before.)

Tomorrow, with a bit of luck, we shall start finding out what really happened when Gordon and Barack met Angela and Nicolas, not to mention Dmitry and his puppetmaster Vladimir. Can't wait. I just thought I'd get this out of the way.

UPDATE: Heritage Foundation ran a competition for suggestions of a better present than that infamous iPod to the Queen. There were two parts, serious and funny, though none were so funny as the real thing. I do, however, like the idea put forward by several participants that President Obama should have given the Queen the US Constitution since he clearly sees no purpose to it. Yes, please!!!