Of rebellions and revolutions 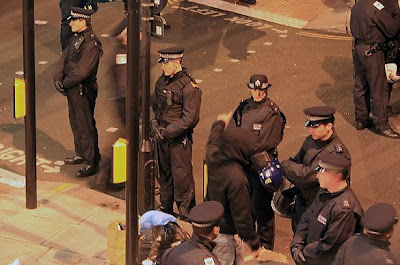 There is much more to this than meets the eye. While the Daily Mail squawks indignantly about an "illegal" rave, as if it was something special and different, barely a weekend goes by without something very similar, on exactly the same scale, being held somewhere in London. The only thing different here was that it was slightly more "in your face" than usual, with a central London location instead of the East End, Brixton or some such.

The "rave" scene, however – or "skumtech" as the players call it - is a direct response to the over-regulation of public music performances, where music must be licensed and approved by the state, even down to genre, with high taxes on drinks and door fees that make normal places non viable - to say nothing of the smoking ban.

It is not a rebellion, as such – simply a lot of people doing their own thing, in their own way. It only becomes an issue if the police move in and try to stamp their authority on the event. Normally, they keep a respectable distance and do not interfere. 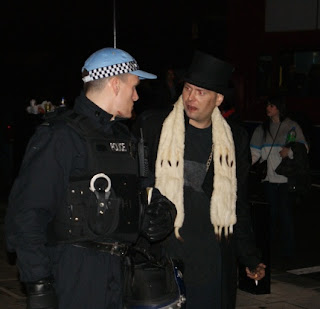 What happened this weekend, though, was that the police got arsy, and tried to close the event down. Rapid texting and other communication brought several thousand "reinforcements" to the scene, whereupon the police were politely informed that they were outnumbered and told to f**k off. Short of a bloodbath, the event was going ahead.

Wisely, the police decided that discretion was the better part of valour. Making the best of a humiliating climbdown, they retreated and told the now gathering media that they were adopting a "watching" brief. The event then went ahead as planned and has run its course, without further police interference.

Had the police sought to do more, there would have been a serious number of broken heads. If in the future, the police – on their own initiative or under political instruction – decide to intervene, there will be some serious sh*t going down. A lot of little plods ain't goin' to be getting up in the morning no more.

Bizarrely, for those who are looking for signs of revolution, they have been under our noses all the time. The youth is not apathetic. Nor is it conformist, but the "skum" are choosing their own fights over the issues that mean something to them. And if The Man wants to get in the way, he will get trampled underfoot. All we need to do is stand back and enjoy the spectacle.