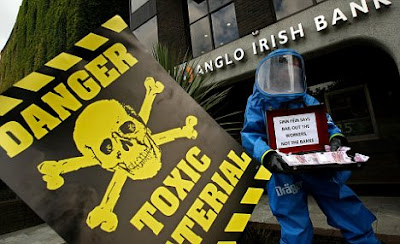 Bad news has followed the Irish government around for so long now that virtually everyone is inured to it. But surely no one can have been expecting the latest, with the announcement that another €12 billion is needed to bail out the banks, bringing the total to about €50 billion (according to The Financial Times).

This figure is described as "horrible" by an Irish government official. It will swell the deficit for one year to a staggering 32 percent of economic output, the biggest in post-World War II Europe, equivalent to €10,000 for every man, woman and child in Ireland.

The Wall Street Journal reckons it's a gamble, swelling the government's own debts instead of allowing the banks to default on payments to creditors. The tactic, says the paper, increases the risks that the government itself will default – and there is certainly doubt about the ability of the Irish state to prevent default on the sum total of its own debt and the bank debt.

The Guardian, however (amongst others), is saying that the markets seemed "reassured" that Ireland had faced up to the worst of its troubles. Irish government bonds actually rose, while losses were capped on European stock markets. This paper is also telling itself that leading business indicators in Germany and the US are fuelling hopes that the world would avoid a double-dip recession.

Meanwhile, the Irish are having to vote with their feet: over 100,000 Irish workers expected to leave country before 2012. With a jobless rate of 13.6 percent, it means return to Ireland's culture of emigration as the double dip recession bites - the very recession that the pundits say isn't going to happen..

Peter Bunting, the Irish Congress of Trade Union's northern general secretary, warns that, in the north and the south, there is a danger that the unskilled and semi-skilled unemployed, the sector least able to migrate, could become a new pool of disaffection that might be exploited by dissident Republican terrorists on either side of the Irish border.

He is maybe not wrong there, although this could be a little alarmist. But such talk is becoming common currency (more so than the euro), with the additional news that Portugal's minority socialist government is urging the opposition to back tough austerity measures for 2011, or "catastrophe" will be the result. Portuguese unions, on the other hand, are warned they could step up industrial action in response to cuts which they say will hurt workers.

Nevertheless, there is always the danger here that one is seen to be a "chicken little". For all the warnings, the sky has not yet fallen in. It is, though, interesting to see the events in Ecuador, where president Rafael Correa has been pelted with tear gas by police angry at a new law that cuts their benefits. They have launched a chaotic rebellion that has put the president in hospital, recovering from the effects of the gas.

Ecuador, of course, is a long, long way away – and South American countries are not a good model for predicting events in Europe. It is fair to say, though, that we have something in common - a breaking point. Few would care to predict how far we are away from ours here. Then, the sweet aroma of tear gas in the morning may be the least of the administration's woes.