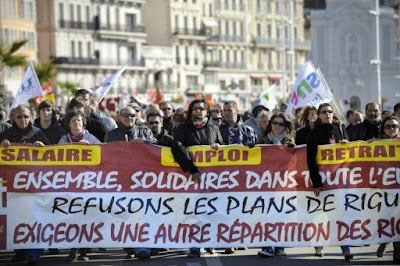 Sad news from France, via AFP is that the Kermits' strike seems to be running out of steam. They can't even run a decent revolution these days.  Interesting though, how the banners are in UKIP colours.

The French parliament is expected to pass Sarkozy's unpopular pensions reform bill tomorrow and finance minister Christine Lagarde hails what she says is "a return to reason and dialogue." The union leaders, who have been leading the strikes and street rallies, admit they will now have to change tactics. They will "work to modify the final form of the reform rather than defeat it on the streets." Yeah, right.

As to the sick bag, listen to Marland if your stomach is strong enough - and note the dismissive reference to Christopher Booker. Then you get this sort of thing, where drought is highlighted in the Amazon, ignoring the earlier record rainfall. This is Nazi-style propaganda. But then, censorship comes easy to these people.

Denis Cooper, meantime, is amused by the report that Merkel wants a new EU treaty to put the eurozone bailouts on a "legally watertight treaty basis."

The main purpose of a new treaty, he says, would be retrospectively to legitimise bailout schemes which have been set up in flagrant breach of the present treaties. Saying that they need a "watertight" legal basis would be rather like saying that your boat is a bit leaky and needs some caulking when in reality it has capsized and it is now resting upside down on the bottom.

A letter to that effect has gone into The Guardian, but don't hold your breath. Meanwhile, one has to concur with the Independent's view of David Cameron, even if for wholly different reasons ... frame that cartoon in the context of the EU and you've got it in one.

Very much in the techie area, we have Mervyn King , governor at the Bank of England, saying that "Basel III will not prevent another [banking] crisis".

For those of us who believe that Basel II caused the crisis in the first place, this is not hard to believe. But what is sad and dangerous is that we are even allowing that failed component of world government to have another go at destroying the global economy. These people are just as dangerous as the "colleagues" - all the more so for being virtually invisible.

Elsewhere, Moonbat deigns to tell us what "Astroturfing" is. I suspect he's only just found out. "Nothing is real any more. Nothing is as it seems," he complains.

From his description of Astroturfing, though, he could just as easily be talking about the warmist movement. But then, according to Steve Goddard, The Guardian is getting rather worried about foreign influence in the US elections, while conveniently forgetting its own input in the last lot.

And as far as "quotes of the day" go, this one is probably unbeatable. It could describe so many people. In due course, it probably will.

Never let it be said, by the way, that we are solely the purveyor of bad news. According to the BBC, a wind turbine manufacturer which received £10m from the Scottish government to safeguard jobs has gone bust. The Danish company Skykon, which took over the Vestas wind turbine factory in Kintyre last year, has announced it is suspending payments to its creditors.

A total of 120 people are employed at the site just outside Campbeltown. In a statement Skykon said the company was in a very "cash-strapped situation." The Scottish government's financial backing was intended to safeguard 100 jobs at the factory and create 300 more.  But, when the company actually names itself, Sky Kon, why is anyone surprised.  But you have to love the slogan ... "part of the solution". Indeed.

Part of that solution also is the Danish firm Vestas, the world's largest wind turbine manufacturer. It is to axe 3,000 jobs and shut some plants to adjust to weaker demand. The heart bleeds.

Do not laugh too loudly though. This website argues that certain types of climate scepticism are "crimes against humanity". It also asks whether US companies are guilty of a new kind of vicious crime against humanity that the world has yet to classify.

The author is Donald A Brown, from PennState – home of Michael Mann. And there is more here as Hansen warms to the theme (pictured above). The heads of oil and coal companies who knowingly delayed action on curbing greenhouse gas emissions were committing a crime. "These CEOs, these captains of industry," said Hansen during a briefing on Capitol Hill, "in my opinion, if they don't change their tactics they're guilty of crimes against humanity and nature."

Returning to Donald A Brown one notes his comment tha: " ... the longer one waits to take action, the more difficultt it is to stabilize atmospheric concentrations of climate change (sic) at safe levels." A correspondent reminds me that to become an "Associate" Professor you need no PhD or brains as the Associate could be the Professor's mistress, secretary, student, cleaning lady or his dog.

That reminds our correspondent of our secret wish in the company he worked for - to use the fast growing species of lawyers for toxicology testing rather than rats and rabbits. Who could disagree with that? 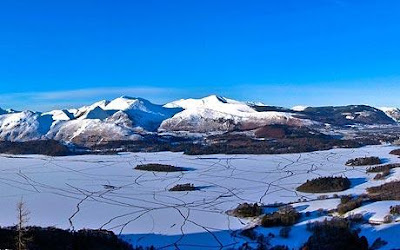 And some final thoughts before I get back to the Battle of Britain, where it is Day 109. The cotton crop in China is under threat after a spate of cold weather, and parts of Britain have suffered their coldest October night for 17 years. Says the article: "Britain has experienced some of its coldest temperatures in recent years. January 2010 was the coldest for 23 years after much of the country was engulfed in snow." The pic is Lake Derwent Water.

Funny how we "suffer" cold and "enjoy" warmth. So global warming is bad because ... ?