Stacking up for cold 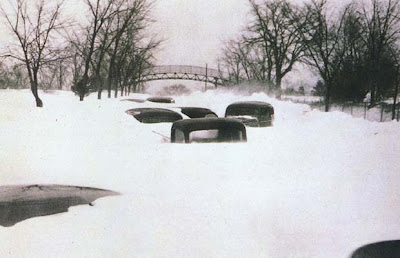 An early winter storm has swamped Reno with record-setting rain and dropped enough snow at the top of the Sierra Nevada to close a mountain highway pass near Lake Tahoe. A winter weather advisory is in effect for Reno, Tahoe and Carson City. The storm, says AP, follows record heat in northern Nevada.

The other side of the world, following a reasonably benign winter, the Southland region of New Zealand (NZ) has in the past week been hit by "the worst spring storm in living memory" according to the NZ Herald.

Six days of blizzards have caused deaths among new lambs numbering in the hundreds of thousands, and raised concern over the welfare of ewes yet to lamb. Besides the effect of the cold weather itself, the continued snowfall has not allowed snow on the ground to thaw, making it much harder for stock to feed. Losses to farmers may run to NZ$50 million or more.

And, as one starts into another weather round-up, at the start of what some are forecasting may be a terrible winter, a curious sense of déjà vu begins to intrude. Look at my report from November 2008.

Go forward a year to the other side of the world, in New Zealand. A "freak snow storm" has left hundreds of people stranded and unable to return to their homes in New Zealand's central North Island. A state of emergency was declared after heavy snow trapped around 700 people in their vehicles on two of the country's major roads. The bad weather, which the BBC says "is highly irregular at this time of year", has forced many to take refuge in nearby community centres.

This I was writing on 12 October - and it was followed here in the UK by a pretty rough winter. Now, following the weather day-by-day through 1940 - as I have been - I am struck by how similar this year has been to 1940, including the bad winter of 1939/40.

This is not terribly good news, because the winter of 1940/41 was even worse. As the photograph above shows, seventy years ago, it was pretty rough. This scene is on 11 November 1940, the so-called Armistice Day Blizzard, showing the Excelsior Boulevard, west of Minneapolis. Then, just look at the AP article from 23 November 1940 (right) - climate disruption?  We've seen it all before.

And in England, it was so cold that, during some air raids, fire hoses were freezing up as firemen sought to tackle the blazes.  Even with fires roaring, and whole blocks burning, sheets of ice were coating the roads, making it doubly hazardous for the emergency services.

All the signs are stacking up for an unhappy experience. But at least it will put the warmists back in their boxes.