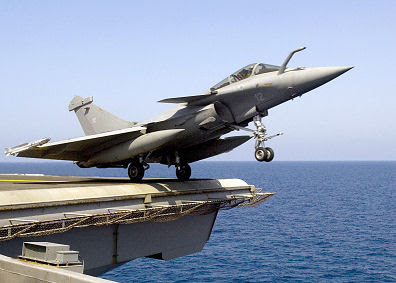 The weekend news that 13th Century Fox is countenancing running the Navy's new carriers without aircraft seems, on the face of it, an admirable solution. Without the noise and disruption of these smelly jets, the new generation of sailors will be able to listen to their iPods in peace, while the MoD can rent the vessel out as a floating conference suite, complete with helipads and tennis courts with a 360° sea view.

But then an evil thought occurs. With the Kermits desperate to keep production going, and a nice training facility in place, what better way of securing Anglo-French cooperation than by having the UK provide the grey floaty thing and the Kermits supplying the toys to go with it?

You can just see this one coming. First, there is a "temporary arrangement", giving the Rhacophorus some much needed deck practice and helping us work up our new playthings. Then, when the general public have got used to the idea, we buy some toys of our own, so that our boys and girls can play together with the Kermits when they are bored with their iPods.

As long as we don't do anything rash, like go out and fight anybody – which the euroweenies tend to be reluctant to do anyway – the arrangement should work perfectly. And just so there is no argument about whose flag we should fly, the Admiralty can invest in one of those pretty ones with yellow stars on a blue background. Then everybody, and especially little Dave, will be reely reely happy.