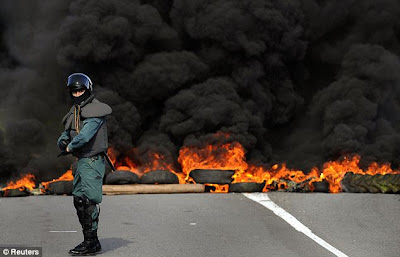 Almost every one of the people I talked to yesterday – and it was quite a few – raised spontaneously the story of Ed Miliband and his brother, but in terms of speaking dismissively of the media treating it as a "soap opera".

Nevertheless, that is how the media deals with its affairs, reducing everything it can to the lowest intellectual level, revelling in the trivia and the drama, oblivious to the important issues and, most often, not even beginning to understand them.

Immersed in the news coverage of yesteryear, however, I am warming to the thesis – often advanced by my erstwhile co-editor – that it has never been any different. While I have seen in the past some very interesting and accurate coverage of technical issues, it does seem to be the case that the last place you can go for analysis and understanding is the media.

Many journalists like to think of themselves as writing the "first draft of history". But more often, their work is an intellectual cul-de-sac, so wrong and so misinformed that it provides only markers as to the fact that something happened - the actual facts having to be gleaned from other sources.

However, for that basic news, the media does still serves a purpose, and it is The Daily Mail which provides the most colourful coverage of the strikes and violence sweeping Europe, and in particular of the General Strike in Spain.

What we do not get, though, is any sense of whether this reflects wider sentiment in those countries, representing Europe on the brink, or whether this is just the action of a few disaffected hotheads with an eye to maximising publicity for their cause.

The evocative pictures, though, warn of things to come here – and the idea of "spending cuts" triggering violence has been much touted by the unions and, most recently, by senior police officers.

With their fingers deeply embedded in the tills, their self-serving cant conceals what we would like to think is the real truth – that the trigger for riots and disorder will be the failure of government to make the necessary cuts, as it continues to slice off greater and greater proportions of our incomes, while delivering less and less.

Talking over the possibility of violence with someone else last night, the view was advanced that a better option is pushing the likes of the EU Referendum campaign, a non-violent option that has the merits of giving activists something to do. 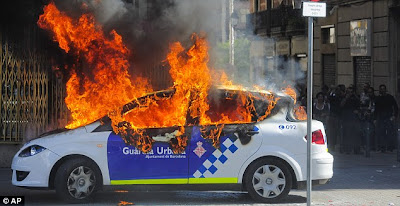 The trouble with this is that doing something, for the sake of doing something, is not necessarily better than doing nothing. And it can be worse. We have to contend with the idea that much of what we do as eurosceptics is actually counter-productive. The other thought is that simply repeating the same tactics that have consistently failed for the last 30 years is not exactly a winning strategy.

Better, perhaps, if we stopped trying to create a mass movement and concentrated on building structures which would enable us to exploit the mass movements than arise spontaneously, when the time is right. For that, we need a different approach – and a very much smaller number of people.

The point, of course, is that violence, if it is going to come, will come for reasons entirely unrelated to our own preoccupations. What is important is that the instability it creates – if it goes far enough – presents opportunities to seek and effect change. But that is only any use if we are prepared, and we are not.

Certainly, gathering signatures and going cap in hand to our rulers to ask "pretty please" if they would be ever so kind and give us a referendum is a complete waste of time and life energy. The time for that is when we have built up the infrastructure that can put a million people on the streets, at a time and place of our choosing. Then, we don't ask ... we demand.