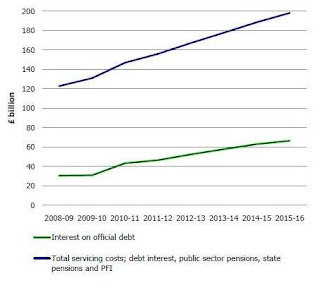 According to a TPA briefing, "one reason why cuts are needed is that debt interest payments are set to rise substantially in the coming years."

The total cost of servicing debt interest, plus unfunded pensions and PFI will be even greater, as shown by the graph (produced by former Treasury and City economist Mike Denham).

By my reckoning, between this financial year and 2014-15, these liabilities increase by about £60bn. By then, however, the Cleggerons are only increasing annual public expenditure by £43bn – giving a deficit of £17bn on that year.

However, it seems that the cumulative shortfall over the period is about £130bn, whereas the cumulative increase in expenditure is about £90bn. That leaves a £40bn deficit, plus whatever departmental increases are given, such as to DFID and DECC - bringing the total deficit to about £50bn - which must be cut from the other departments in order to make the books balance.

In terms of the departmental increases, one item we are looking at is the £2.9 billion to DECC for international climate finance "to help developing countries pursue low carbon growth and adapt to the impact of climate change." Under the current regime, the only way this can be afforded is to claw it from the health, defence and other departmental budgets.

The same applies to the £3.7 BILLION increase to DFID for foreign aid – assisting the Indians to develop their space programme – which will also have to be clawed from health, defence, etc. That's £6.6bn which has to be withheld from hospitals, schools, police, roads, etc., etc.

Thus, as it stands, the premise that there are no expenditure cuts survives. Year-on-year, public expenditure increases. So what we have is a re-ordering of the budget to fund debt, pensions and the increases in the DECC and DFID budgets, amongst others. In effect, services are being cut because total public spending is not being increased to fund current service levels, the increases in current liabilities and Cleggeron spending priorities.

What this amounts to, therefore, is that we are going to have to pay more to get considerably less, as services get cut to make the books balance. But don't anyone pretend that overall expenditure is being cut. It isn't. Jeff Randall agrees, but you read it here first.