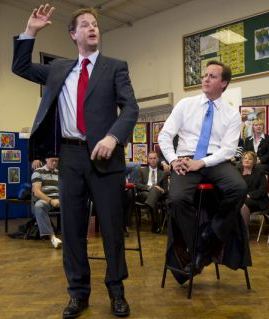 Well, the Daily Mail is on the case, telling us that Boy Dave and his ghastly sidekick Clegg, "felt the full force of public anger over huge increases in the international aid budget - as it emerged the move will cost every family in Britain almost £500 a year."

Call me Dave was "forced on to the defensive over the controversial decision to lavish billions of pounds of taxpayers' money on foreign aid at a time when services at home are facing unprecedented cuts." A member of the public confronted him over the issue at a public meeting in Nottingham yesterday, telling him: "Charity should begin at home."

Certainly, she ain't far wrong, but forgot to point out to this dire pair that they are seriously, decidedly and absolutely barking mad ... so far off their trolley, the damn thing is still iron ore in the ground. They have totally and completely lost it.

Think of all the heart-searching on the carriers and the Navy cuts and these f***wits are giving £2.9 billion to their jungle bunny carbon fund - the international climate finance "to help developing countries pursue low carbon growth and adapt to the impact of climate change," and then increasing the already over-generous foreign aid bill by £3.7 billion.

Meanwhile (pictured) Clegg is giving dancing lessons to earn a spare bob or two – the only useful thing he will do this year. One would like to think he has assumed the position to relieve the pain from having his own brains shoved up his backside – although they are small he would hardly notice, I suppose.