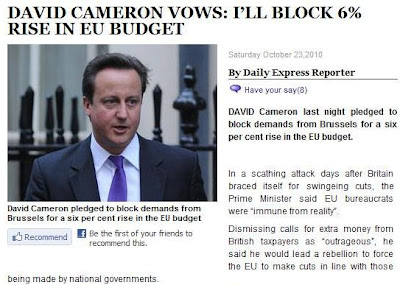 Cameron is pledging that he will block the six percent rise in the EU budget which is set to cost us an extra £900 million this year. Can he do that? Well ... the short answer is no. Only the EU parliament can do that. And the long answer? That is here in the consolidated treaties as amended by Lisbon – Article 314.

Basically, what happens is that the Council looks at the proposed budget and agrees a "common position". This is Cameron's first hurdle. If he wants to block the budget, then he has to get a majority on the Council under the QMV procedures.

Supposing by some miracle he get his majority ... not that he will ... the next move is up to the EU parliament. The Council decision is put to the parliament, which decides whether to agree with it. If not – which would be the case - it draws up amendments and forwards them to the Council.

A conciliation committee is then formed to hammer out a joint text. This must be approved by the committee, the Council component by QMV, the parliament by a majority. But then comes the killer:

In other words, if the conciliation committee comprising the parliament and the council (the latter acting under QMV) agree the budget, even if the full council then rejects it, the parliament's vote is decisive. It can still approve the budget, without the approval of the 27 member states - of which the UK is but one.

Basically, the power has shifted to the EU parliament, through the Lisbon treaty ... the one Cameron wouldn't give us a referendum on. It is very difficult for the Council to block the budget. As for any member state, without a supporting majority on the council, and again on the conciliation committee, that cannot be done. So, without the support of the other member states, there is nothing Cameron can do.

But then, in the small print, Cameron is not saying he will block the budget. He is actually saying he will "lead a rebellion" against the budget increase. He can "lead", but it is unlikely that any – or enough – will follow. Therefore, this, as always from the Boy Dave, is so much hot air. The "rebellion" will fail, but he can say he tried, knowing all along that any attempts will fail.

When you think about it though, it is more than "hot air". The boy child is taking the piss again. His advisers must have told him the chances of stopping the increase are nil. So he is concocting this elaborate little charade, so he can prance around looking as if he is doing something. But even the muppets on Tory Diary seem to have got that point.

And then they wonder why we look at their posturing with nothing other than undisguised contempt.