You're gonna be screwed 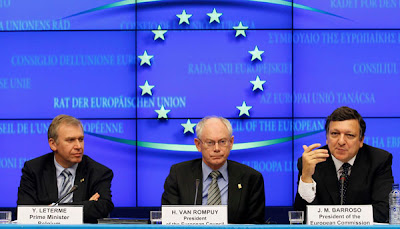 In any evaluation of a European Council meeting, we always have to be conscious that we have an ignorant media which cannot get its head round the fact that we are seeing the routine meeting of an institution of the European Union. It is never, therefore, going to report the proceedings intelligently or accurately. It is not capable of so doing.

At least, though, The Guardian has got some things right. It tells us:


Europe is in a mess. The European Union is in trouble. Today's summit in Brussels is unlikely to do much to help. David Cameron, like his fellow leaders, can only hope to limit the damage: and even as he does so he can hear the ghoulish sound of Tory Euroscepticism rising from the grave.

The problem is that only four of the first five words are really spot on ... it is not "Europe", but the European Union. And as for Dave's little games with the EU budget, had any one of the hacks so breathlessly reporting on the issue cared to look at the agenda, they would have seen this:

That's Van Rompuy calling the shots – and the budget is not on the agenda, because it will not be (and has not been) examined by the European Council. That is for the very good reason that it is not within its jurisdiction. Hence, all the hyper-ventilation about said budget is smoke and mirrors. 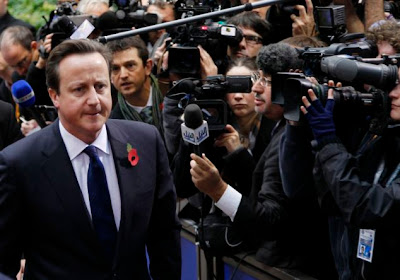 Even the BBC has the "decency" to mention that small fact. But that doesn't stop the hacks drafted in to cover the event turning up the volume of hyperbole, to give their equally ignorant London editors a suitable fairy tale to print in this morning's editions. This is precisely what the Daily Mail is doing. Dave "has won the backing ... " it warbles, complete with a picture of a suitably grim-faced Dave, walking into Justus Lipsius - and what a revolting sight that makes.

By such means, there is engendered  a sense of theatre and drama that simply does not exist. They are - politicians and media pack alike - taking the piss, as always.

Similarly, the talk of a new treaty is getting lost in the miasma of ignorance which so obscures these issues. In short, if the "colleagues" want a new treaty, there are various defined procedures. However, there is a now confirmed tendency for those same "colleagues" to make the rules up as they go along, and then legitimise them afterwards.

And we've now got a statement from Rompuy about how they're going to do it. Not one in a thousand who actually read the statement will fully understand it, and even less will actually care. Get your brains round this, if you are in a masochistic mood:


Further to the report of the task force and in order to ensure balanced and sustainable growth, heads of state and government agree on the need for member states to establish a permanent crisis mechanism to safeguard the financial stability of the euro area as a whole and invite the president of the European Council to undertake consultations with the members of the European Council on a limited treaty change required to that effect not modifying Article 125 (of the Lisbon treaty) - the no bailout clause.

This is "slime talk", otherwise known as "Eurospeak". You are not supposed to understand it. You just weigh it and then slice it off by the centimetre. All it says – as it always says – is "you're gonna be screwed".  The detail doesn't matter. Stick to the high ground and you will never go wrong.

The only thing of even marginal interest, therefore, is precisely how and when we get screwed. We don't know that yet - or not all the details. And the media will never tell us until it's too late. Because they know so little about the EU, and understand even less, they only find out afterwards, if then.  Usually, the dogs have barked, the tents are folded and the caravan has moved on to another soap opera - there are always some buried miners, or something, somewhere, to keep the proles entertained.

So, for the moment, after a brief flurry of interest when the media have done their best to turn the European Union into a soap opera - with as much of a London tint as they can manage - we can all go back to sleep. We can try to convince ourselves that it is really a dream we're experiencing and not a nightmare, but sooner or later, there will have to be an awakening.

Sooner or later, the people - who knows in which country and when - will rise up and start killing these bastards.  That will happen, because it always does.  The politicians can take the piss for so long before people get sick of it and exercise some practical vermin control. And the media won't even see it coming - they never do.