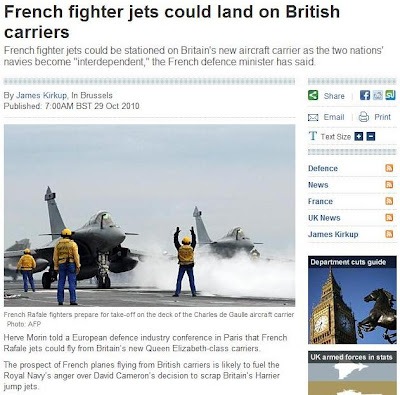 In The Daily Telegraph (with elaboration in The Guardian), we now read that French Rafales may be using the Royal Navy carriers. You did, of course, read it here first and then here.  Amazingly, after the debacle of the "carriers with no planes", we are now told that, trying to bridge the “capability gap”, ministers have said the new carriers will be redesigned to have catapults to launch aircraft. That "will allow them to carry planes like the French Rafale". Oh, what a surprise.

The beans have been spilled by French defence minister Morin, who has told a "Euronaval conference" that: "I've asked our military command to consider the feasibility of stationing British aircraft on our aircraft carrier and vice versa." He added: "The idea is an exchange of capacity and an interdependence. It's a new approach." 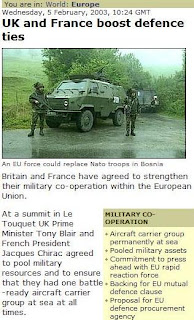 Is it b******s a new approach. That has been the plan all along ... even the BBC recorded it in 2003. It was picked up by The Daily Telegraph and on 4 February 2003, AFP reported that "Britain and France will use a joint summit to announce plans for a European naval force equipped with an aircraft carrier battle group on standby at all times ... ", all under the headline "Europe plans joint naval force".

And, of course, all this was agreed by the EU General Affairs and External Relations Council on 17 May 2004 and endorsed by the Helsinki European Council of 17 and 18 June 2004 as the Headline Goal 2010, where there was an undertaking to supply the European Rapid Reaction Force with an aircraft carrier, its associated air wing and escort. Do they think we are that stupid?

Anyhow, us poor little dimwits are told: "The British have decided to equip their aircraft carriers with catapults - we can have joint exercises, but also arrange to have a Rafale squadron make use of the British platform." The plan would give France "a permanent presence at sea" even when its single aircraft carrier, the Charles de Gaulle, is in dock for maintenance and cannot sail, Morin says.

And so we march on to the Euro-navy.  Dave the slime presides over the work of his predecessors, Blair, Major and Heath. The Royal Navy is being sold out on the altar of European political integration.  A more potent symbol of integration could hardly exist, and it's all but in the bag.

UPDATE: Reuters is reporting that Britain and France are discussing Britain's new fleet of tanker aircraft ahead of Thursday's summit on Anglo-French defence "cooperation". The Telegraph report also refers to the French supplying a maritime reconnaissance capability, to replace the scrapped Nimrod MR4s.

Thus does the pace of integration quicken, aided and abetted by the incompetence of the MoD – and previous Tory governments. Who was it decided on the Nimrod MR4 instead of a new-build?

The real irony is that, if we ditched the EU and put the money into defence, we would not – on paper at least – have the capacity shortfalls we are now experiencing. However, that discounts the MoD's gift for wasting our hard cash, which means that extra money would not necessarily yield dividends, even if money is better wasted on MoD (and new iPods for the Navy) than on EU integration.

Nevertheless, the real agenda of the Defence Review is coming clear - cut back equipment to create or intensify capacity shortfalls, which creates a need for further EU "co-operation" and legitimises defence integration, carefully disguised as measures to improve operational efficiency.

RAFALE THREAD
Posted by Richard at 11:00