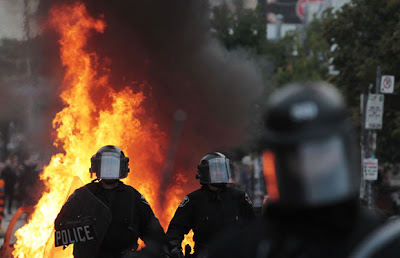 There's big news, as in earth-shaking events (sometimes literally), and then there's "little" news, things that happen to ordinary people and normally don't make the media – but which very often have a vastly greater impact on the people involved. Richard Littlejohn is doing the latter in this article - rather appropriate, given his name.

The first story concerns a brush with the police, all too familiar these days – leading to the observation that "the police wonder why Middle Britain’s faith in the forces of law and order is at an all-time low". Actually, I don't think they do. My general experience is that they don't give a shit what "Middle Britain" thinks of them – otherwise they wouldn't be doing what they do, in the way that they do it.

And this is not just theoretical. We now have Kit Malthouse, London's deputy mayor with responsibility for policing and crime, saying officers from Britain's largest force are living in villages in Surrey and Hertfordshire partly because of concerns over living in London.

He said there is a "growing divide between the police and the public, which is not yet at dangerous levels but may well become so". Speaking to the Commons Home Affairs Select Committee, he said: "Police officers now, certainly Metropolitan Police officers, often want to live in police ghettos, villages in Surrey and Hertfordshire, which are disproportionately over-populated with police officers because they like to live together."

The chairman of the Metropolitan Police Authority said the growing divide between police and the public could be seen "in all sorts of ways". Officers and police community support officers (PCSOs) "now don't like to travel in uniform because they don't want to be identified", he said.

This was a reference to an incident in Croydon two years ago in which two officers were attacked by "a baying mob" after confronting two young girls over dropping litter. "No one came to their aid, quite the opposite," he said. "The public feels as it they have less and less investment in the police service. That sense of investment, and that sense of ownership of the police, has somehow deteriorated."

And the guy featured in the Littlejohn story is yet another one who would probably no longer cross the street to help the police, even if they were on fire. And that is not so very far from being there to pour the petrol. As they sow, so shall they reap. It may take time – but it happens eventually. And it's the "little" news that gets the crowds going.