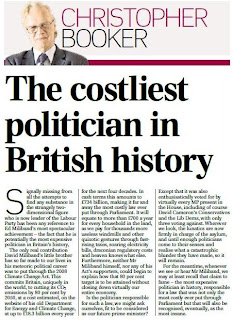 Those who have met him and tried to explain to him some of the simplest aspects of his former brief tend to agree on one thing – the man is thick. He betrays not the slightest understanding of the technicalities of global warming, or energy supply, despite having been secretary of state for both.

And, as Booker points out, Ed Miliband is also potentially the costliest politician in British history, after championing the 2008 Climate Change Act – his only significant achievement in his meteoric political career.

Given the fatuity of this legislation, its extraordinary expense and the damage it will do to the economy – to say nothing of the baleful effect on people's lives, you might think that this one and only achievement might disqualify the man from further high office, or any office at all apart from honorary, unpaid dogcatcher.

But not a bit of it. Signally missing from all the attempts to find any substance in the strangely two-dimensional figure who is now leader of the Labour Party has been any reference to this very achievement – the fact that he is potentially the most expensive politician in Britain's history.

The legislation commits Britain, uniquely in the world, to cutting its CO2 emissions by 80 percent by 2050, at a cost estimated, on the website of his old Department for Energy and Climate Change, at up to £18.3 billion every year for the next four decades.

In cash terms this amounts to £734 billion, making it far and away the most costly law ever put through Parliament. It will equate to more than £700 a year for every household in the land, as we pay for thousands more useless windmills and other quixotic gestures through fast-rising taxes, soaring electricity bills, draconian regulatory costs and heaven knows what else.

Furthermore, neither Mr Miliband himself, nor any of his Act's supporters, could begin to explain how that 80 percent target is to be attained without closing down virtually our entire economy.

Is the politician responsible for such a law, we might ask ourselves, fit to be considered as our future prime minister? Except that it was also enthusiastically voted for by virtually every MP present in the House, including of course David Cameron's Conservatives and the Lib Dems, with only three voting against.

Wherever we look, the lunatics are now firmly in charge of the asylum, and until enough politicians come to their senses and realise what a catastrophic blunder they have made, so it will remain.

For the meantime, says Booker, whenever we see or hear Mr Miliband, we may at least recall that claim to fame – the most expensive politician in history, responsible for a law that was not only the most costly ever put through Parliament but that will also be recognised, eventually, as the most insane.

And that is what is so deeply, darkly depressing – the idea that our MPs, many of them re-elected and still in the House, could be so utterly stupid, so crass and so devastatingly blind as to vote for this legislation, and thence to support either Miliband, Cameron or Clegg – all of whom support this ruinous imbecility.

With this and our continued membership of the EU – and many other insults – no person can have any dealings with these fools. By any measure, they have disqualified themselves from polite society.