What will the warmists do? 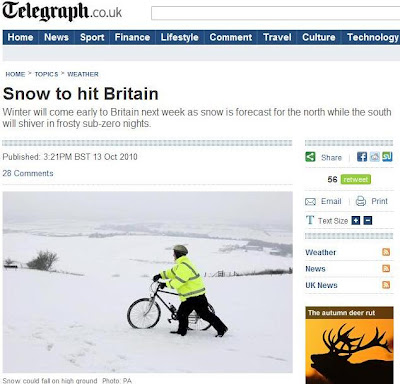 They ought to make Louise Gray write the sort of article illustrated above, as a penance for the sort of crap she so often produces. But it is great fun to see the warmist Telegraph offering dire warnings about forthcoming cold winters.

Also fascinating is to see is the forecaster "Weather Outlook" - which is said to have an accurate seasonal forecasting record – warning that the UK is "now being gripped by a bitter series of winters comparable with the harsh 1939-42 winters which made conditions so horrendous during the Second World War."

I seem to recall saying something not dissimilar myself recently, once or twice, although it is difficult getting a reliable narrative as, in the UK, it was illegal for newspapers to publish details about the weather during most of 1940.

However, someone must have seen the fatuity of banning discussion when the Germans were sitting on the other side of the Channel, and their aircraft were making daily visits to all parts of the country. Thus, towards the end of the year (1940) there was a slight relaxation.

As a result, on 11 October 1940, we had John Ware in The Daily Express writing a long article about the weather. I thought you might find it interesting, so I have transcribed the whole article below:


Now that the Germans are just across the Channel and over this country every day, the weather is again being talked about and written about in the news. But for nearly a year it was kept secret – the most fantastic weather year since British records were kept.

Hardly a week from November 1939 to the end of September 1940 would have been off the front pages in peacetime with its weather freaks, and the Englishman's favourite topic would have echoed all over the country like the meteorological storms that made it.

The coldest winter for forty-five years was followed by the best summer of the century and the driest since 1921. But it was not a particularly hot summer – the impression of heat that lingers in your mind from those days between the beginning of May and the middle of September is due to the almost continuous sunshine. No day produced a temperature over 90 degrees, although June 8 and 9 were near this figure.

But the hottest day of the year came late. It was on September 4 when the mercury just touched 90. No previous record of the hottest day coming so late in the year has been found. The drought, which would have been on the front pages for many weeks, was almost continuous from May.

No day until the middle of July recorded more than .01 inch of rain – the minimum required to break the drought. May and June were continuously sunny and clear-skied. The July break lasted a fortnight with some rain and cloud. Everybody said: "We can't grumble. We've had such a wonderful summer and now it's over. How we could have enjoyed it but for the war."

And then August came in – the driest August since 1818, a hundred and twenty-two years! Even with the ever-present danger of giving information to the enemy the authorities had to put out posters warning you to use less water. August was almost entirely rainless and this persisted until September 8, when a gradual deterioration in the weather took place.

The spring which followed the severe winter began the long summer with almost summer temperatures. April averaged more than three degrees up on normal. And surprisingly the BBC mentioned the "beautiful spring day" on April 8 in a broadcast to Germany. But the newspapers were prohibited from mentioning it.

The lowest temperature was 10 below zero, recorded at Rhayader, Radnorshire, on January 21. More insurance claims for cars with engines split by frost were recorded in January than in the whole of any one winter. Trains took a week to get from London to Glasgow, the passengers sleeping at wayside stations unable even to reach a road, which in any case they would have found blocked.

Factory workers in East London were unable to go home for two days and stayed in the factory hostel. Snowdrifts sixteen feet deep were reported in outer London areas.

This weather, which began before Christmas, lasted until March. It included Britain's worst ice storm, which was hailed as a thaw and proved to be a frost. The rain came down and as it fell into the lower atmosphere it froze. Nearly the whole country was covered with ice for two days, and transport was stopped.

Conditions were so abnormal that the Air Ministry relaxed its ban on the news and told the story.

Of special interest to us though, is that this is the start of thirty-year so-called "little cooling" – bizarre weather which exactly conforms with the warmists' "climate disruption". The more we get of this weather, and the closer the parallel we have with the forties, the more likely it is that we can say we are experiencing another period of extended cooling.

And what will the warmists do then, poor things?