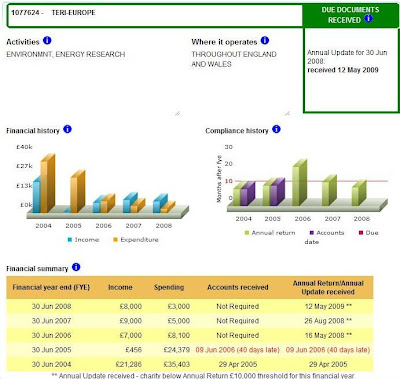 Your really don't have to take my word for this one – the evidence is visible for all to see. Above, Exhibit A, a screen grab from the Charity Commission web site, taken when Booker and I were investigating TERI-Europe's accounting procedures. Below is Exhibit B, a screen grab of the current site, after we had drawn the Commission' s attention to some accounting anomalies, following which TERI-Europe were required to submit new accounts. 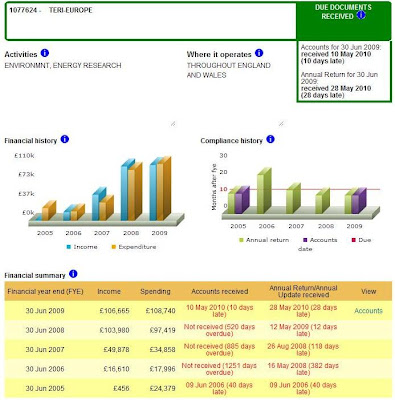 And now Booker, in his column, puts the matter in perspective, noting that next weekend, as delegates from 194 countries gather in South Korea for a crucial meeting of the UN's Intergovernmental Panel on Climate Change, their big talking point will be whether the IPCC’s chairman Dr Rajendra Pachauri should resign.

Booker's column is heavily "legalled" but it still manages to get through the very peculiar story of Rajendra Pachauri's idea of accounting – for it is he that is one of the founding directors of TERI-Europe and trustee.

The interesting thing is that, when we had completed our investigation and approached TERI-Europe with our evidence, the charity's secretary immediately admitted that there were "anomalies" in the accounts. She could hardly do anything else – we had them banged to rights.

The Charity Commission agreed to investigate. Not the least point of interest was that the charity's trustees – "responsible", in the commission’s words, “for approving the accounts before submission” – included, alongside Dr Pachauri, two other luminaries of the global warming establishment.

Sir John Houghton was a founder of the IPCC, and had long played a key role in it. Sir Crispin Tickell was one of Houghton’s most influential allies back in 1988, as "our man at the UN" and as the adviser who talked Mrs Thatcher into enthusiasm for global warming at that crucial moment (a fervour she later disavowed).

Since it seemed that both TERI-Europe and the trustees were in serious breach of the Charity Commission's rules, this has led over recent months to a protracted series of exchanges with the commission.

First, the names of Houghton and Tickell swiftly disappeared from the list of trustees. Then, in May, after an audit by a firm of accountants, the commission's website showed dramatically revised figures for one of the three years in question. The charity's income for 2008 had now risen from £8,000 to £103,980, its expenditure from £3,000 to £97,419.

But the figures for the previous two years were unchanged. The commission explained that it had allowed this "to save the charity a considerable amount in accounting fees". It also claimed that the errors were due to the charity’s "inexperience in preparing accounts", though the figures for earlier years showed no sign of "inexperience".

In response, we devised "10 searching questions" which Booker put to the the commission. Why, for instance, was its website continuing to give false information? Would the commission show equal leniency to other bodies found to have provided misleading accounts, since normally a charity would be severely penalised for such offences?

Bizarrely, when we eventually got the response it didn't give a direct answer to any of the questions, except to say that the Commission was not prepared to disclose the date on which Houghton and Tickell had resigned as trustees.

Doubtless, compared to the difficulties Dr Pachauri may face next weekend in holding on to the post which has helped him so to extend his institute's fortunes, these accounting anomalies in one of its branches may seem pretty small beer. But an important question remains: why, when they came to light, did the Charity Commission struggle so long and hard to give this particular charity such an extraordinarily easy ride?