Look in the archives Mr Johnston 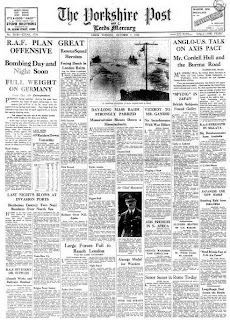 Philip Johnson – a journalist for whom I once had some time – is in his usual comment spot in The Daily Telegraph. This time he is whingeing about the EU budget, telling us that "MPs can't block the EU budget – but they could at least register a protest."

To put it bluntly, though, who gives a tinker's cuss whether that deadweight dross in Parliament registers anything? As Philip so neatly states, "For good or ill, we are in the EU and no mainstream political party is proposing that we leave." And he also tells us that, "Along with several other countries Britain argued unsuccessfully for a freeze in the budget but was outvoted at an EU summit a few weeks ago."

Put two and two together and all you have left is a bunch of expensive and impotent timewasters – along with Mr Johnston and his media friends, whose own inadequacies are far too numerous to mention.

But, if we stay with the print media, of which Johnston is part, a scan of today's paper with a critical eye immediately tells you the problem. As I noted with The Sunday Times recently, we are being (and have been for some time) short-changed. Typically, in The Telegraph, a page will give you three, or maybe four stories, a large picture and an advert. And, as so many of the stories are lightweight dross, a whole newspaper can contain no more than two or three (being generous) stories of interest and substance.

Compare and contrast the edition of The Yorkshire Post for 1 October 1940. You will see over 20 substantive stories on just the front page. The publishers are rationed to just six pages (something for our green "friends" to think about) but in those there is more information than you will get in a week's supply of the current newspaper.

So we return to Mr Johnston, who bleats from his sadly depleted corner, that the EU's spending "must be subject to the same rigorous scrutiny that we expect from domestic governments."

Apart from the fact that it is a waste of time scrutinising that over which we have no control, the point that Johnston misses is that the media should play a huge part in the scrutiny process. But there is no adequate scrutiny even of domestic governments, as newspapers cut down their journalistic input and devote more and more of their space to tat. It is hardly likely, therefore, that the EU will get, or can get, sufficient attention.

That, of course, is where the blogs come in. A carefully selected range of well-written and informative blogs will give you far better coverage of events, with wider and more thought-provoking comment than the whole of the MSM.

No wonder Mr Marr is so vitriolic. He knows when he has been outclassed. But, for Mr Johnston, the answer to his "scrutiny" issue lies in the archives. When newspapers start looking like newspapers again, we might possibly be able to claw back some of the lost ground. It won't be sufficient, but it is probably necessary. In the meantime, the blogs have it and Marr can return his head to its rightful (and usual) place – up his own rear end ... and Johnston can carry on his ineffectual bleating.