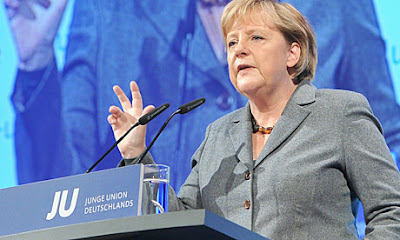 When Merkel says it, she can get away with it ... just. And she has said it: "German multiculturalism has 'utterly failed'". She was speaking to a meeting of youth wing of her Christian Democratic Union party, and declared that the idea of people from different cultural backgrounds living happily "side by side" did not work.

New arrivals to do more to integrate into German society, she thus says, a move that is seen to be courting "growing anti-immigrant opinion in Germany", which is home to around four million Muslims.

Furthermore, Merkel is not the first mainstream politician in recent time to break the taboo. Last week, Horst Seehofer, the premier of Bavaria and a member of the Christian Social Union – part of Merkel's ruling coalition – called for a halt to Turkish and Arabic immigration.

Both politicians, though, are responding to pressure from within the CDU to take a harder line on immigrants who show resistance to being integrated into German society. And there can be little doubt that Muslims are the target.

In a recent opinion poll, the majority of Germans who responded (55 percent) believed that "Arabs" (aka Muslims) are "unpleasant people", compared with the 44 percent who held the opinion seven years ago. Another recent poll showed one-third of Germans believed the country was "overrun by foreigners" – aka Muslims.

Some of these people may have the sense to realise that they have outstayed their welcome, and get out of a country which has a lingering reputation for seeking final solutions to major problems. Once the tides of history start turning, they tend to develop an unstoppable momentum - and the difference this time is that we need to be alongside. You can abuse hospitality for only so long ...